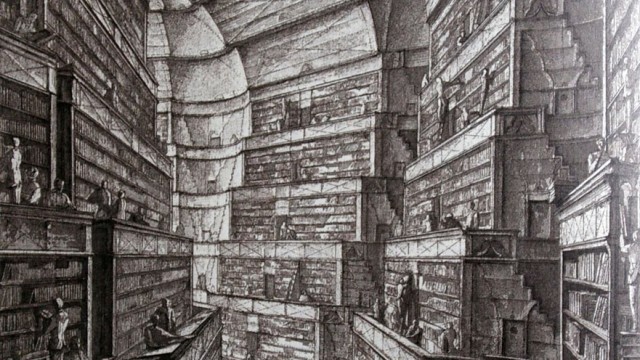 Infinite Space and the Universe-Archive (2/4)

Author: Jillian Crandall
Category: articles/essay, writing
← Everything Existed at Once (1/4)
Structures of Navigation and the Syntax of the City (3/4) →

(Part 2 of a four-part series adapted from a lecture that I gave at Pratt GAUD, kindly invited by Carla Leitao for her seminar “Architecture and Information Space”)

INFINITE SPACE AND THE UNIVERSE-LIBRARY

Let me step back to the topic of the universe as ultimate (ostensibly infinite) archive. This recurring trope is found in many works of fiction, but the works of Jorge Luis Borges are perhaps the best example. What is so fantastic about his work is that Borges’s manner of observing things through the prism of eternity and infinity clearly indicates that his stories are not meant to be interpreted on one or several or many levels, but as an endless proliferation of all possible levels. Borges’ subject matter is literally everything, and his stage is the time-space continuum of the entire universe. 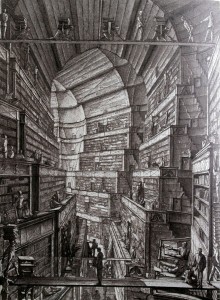 Erik Desmazieres etching illustration of the Borgesian Library of Babel

This is the case in this first-person narrative of the Library of Babel. Here Borges describes an indefinitely large collection of books of uniform format—the library as the universe. The books are the basis for life for every individual in the library: as such, the occupation of many is the obsessive interpretation of the seemingly meaningless books. He refers to Man as the “imperfect librarian.” Contained in the books are strings of letters that only great linguists (and wise oracles) can interpret. Of course, finding the one book that would explain all of the rest would make one omnipotent. On the other hand, for every one copy of that one God book, there would be millions of near-perfect facsimiles, with only one or two words changed, but the whole meaning of the work reversed.

In Borges’s conception, the Library of Babel itself is a building composed of an indefinite number of hexagonal galleries. A ventilation shaft in the center of each allows the visitor to see the floors above and below, in endless sequence. Each wall of each hexagon holds 32 books of identical size; each book has 410 pages; each page, 40 lines; each line, approximately 80 letters. All possible combinations of the 25 orthographic symbols make up the books; therefore, every conceivable book must exist in the monstrous library.

Borges confessed that the numbers he chose for the shelves and books in his story were simply those of the municipal library of Buenos Aires where he worked and found so unstimulating. To cross our universe, which is incomprehensibly dwarfed by the Library, light would need to travel for at least 15 billion years. It would take a librarian considerably longer — a mathematical certainty that mirrors the nightmarish vision Borges said he wished to convey. That realization, to Borges at the very least, produces great existential anguish. 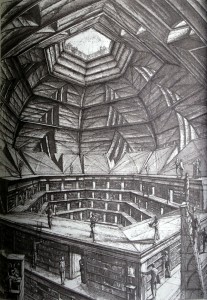 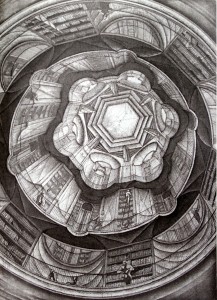 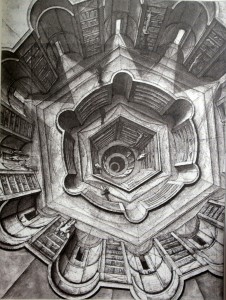 Borges ends the story: ” The Library is unlimited and cyclical. If an eternal traveler were to cross it in any direction, after centuries he would see that the same volumes were repeated in the same disorder (which, thus repeated, would be an order: the Order). My solitude is gladdened by this elegant hope.” This is a decentralized totality – suggesting that we are confined within an inescapable system.

However, in the notes and then later in the Book of Sand, Borges poses an alternative scenario: “a single volume would be sufficient, a volume of ordinary format, printed in nine or ten point type, containing an infinite number of infinitely thin leaves. … each apparent page would unfold into other analogous ones; the inconceivable middle page would have no reverse.” In this case, the infinite library is contained in a single book. (This seems to be a Centralized totality –which suggests that we may possibly be able to exist outside of the system.) 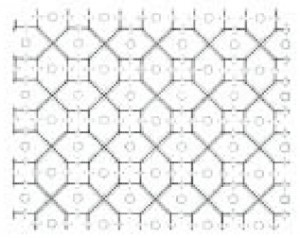 Visual interpretations of the Library show it either as a geometrical pattern in plan, or a perspectival interior of impossiblity. Cristina Grau sees it as a network of spaces connected through rings of circulation, however, her galleries are octagonal instead of hexagonal. Too, the Erik Desmazières etchings are quite compelling. As for the deviance from the original, this is something that’s inevitable in the translation of Borgesian space. The Library of Babel is a space that becomes labyrinthine in the text, and so, a direct translation of its geometry-as-outlined would be no more than a flat reduction that denaturalizes the original. The qualities of Borgesian space are so much in the meaning of the words as in the words themselves, and as much in the described geometries as in the convoluted way in which this description is constructed. That’s why Escher’s impossible constructions, or Piranesi’s etchings have the ability to invoke the ethos of these spaces in a way a (reductively) faithful reconstruction couldn’t.

The Library expresses the gap between the total perception of the world as infinite possibility, and the time bound life of humans whose experience of a system from within prevents them from grasping its construction. Borges employs paradoxical loops and a shifting sequence of hypotheses to create a disorientating reading experience. The concept of the labyrinth is built into the text. It suggests that if a reasoning path is laid out as a maze, the spatial labyrinth must play a larger role in explaining the Library’s secrets. He implies that underneath the semantic surface of the text where ideas about chaotic words and labyrinthine spaces are tightly interwoven there is symmetry connecting antithetical concepts beyond their position in the textual plane. They all seem to converge to the opposition between intellectual order and sensory observation, or the Platonist distinction between eternal ideas and their representation. 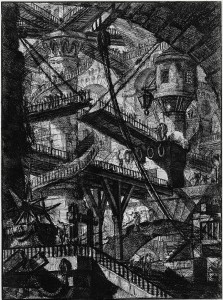 This corresponds to the great paradox of architecture. In “Questions of Space: The Architectural Paradox of the Pyramid and the Labyrinth”, Tschumi establishes a duality of space in architecture between that of conceived space and perceived space. While I think there are some problems in such a dialectical reduction, Tschumi seems to refine the idea in Architecture and Disjunction.

“This “experience” may have repercussions that go far beyond man as its “subject.” Torn between rationality and the demand for irrationality, our present society moves toward other attitudes. If system plus excess is one of its symptoms, we may soon have to consider architecture as the indispensable complement to this changing praxis. In the past, architecture gave linguistic metaphors (the Castle, the Structure, the Labyrinth) to society. It may now provide the cultural model.

As long as social practice rejects the paradox of the ideal and real space, imagination – interior experience – may be the only means to transcend it. By changing the prevalent attitudes toward space and its subject, the dream of the step beyond the paradox can even provide the conditions for renewed social attitudes.” (p. 51-52)

Imagination – not knowledge, not even understanding – may be the only device which can transcend the paradox – and architecture can take an active role. Which is why Borgesian fiction has the effect it does; why the impossibility of Escher’s drawings and Piranesi’s etchings and other capricci operate on an alternate spatial plane of existence. Piranesi’s Carceri d‘invenzione are inescapable spatial paradoxes. The prison interiors have no outer walls, and each vista is cut off only by the frame of the image itself. The spaces are so big, so continuous, that they may not even be interiors; this may be a city that has grown into a world where interior and exterior are no longer definable. 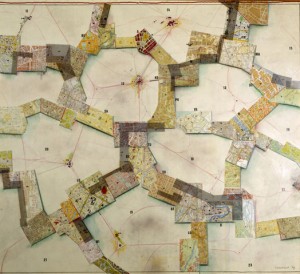 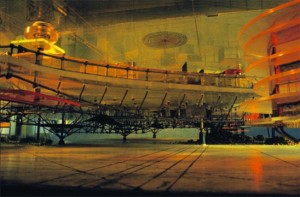 Even Constant’s New Babylon enters into this territory. According to Bataille, In the labyrinth, there is no future or past – they are not relevant anymore – only the present. The project of the future (to map one’s way out) or the past (to trace one’s way in) becomes the prison of the present; they are but openings of the labyrinth.

//part-three:  structures of navigation and the syntax of the city