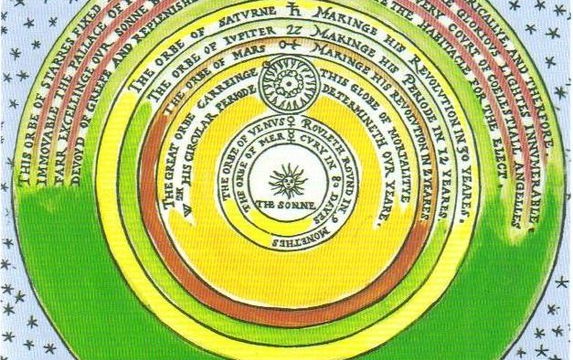 Everything Existed at Once (1/4)

(Part 1 of a four-part series adapted from a lecture that I gave at Pratt GAUD, kindly invited by Carla Leitao for her seminar “Architecture and Information Space”)

This title is intentionally ambiguous and can be read in different ways. It could suggest that “at once, everything existed” at one time or another, in the past, and that the library or the archive preserves its history of existence, no matter how selective that history may be. It could also be read as “everything existed all at once” with past, present, and future collapsing to a single overwhelming moment.

I want to start by quickly introducing Isaac Asimov’s short story “The Last Question.” The story is broken up into several segments, with each segment revolving around an evolving supercomputer. In each segment, humans pose the question “Can entropy be reversed?”, to which the computer responds, “There is insufficient data for a meaningful answer.”

In the last scene, the descendant of humanity (the unified mental process of over a trillion, trillion, trillion humans) watches the stars flicker out, as the universe finally approaches the state of heat death. Before humanity merges with Multivac and disappears, it asks the entropy question one last time. AC is still unable to answer, but continues to ponder the question even after space and time cease to exist. Eventually AC discovers the answer, but has nobody to report it to; the universe is already dead. It therefore decides to show the answer by demonstrating the reversal of entropy, creating the universe anew. The story ends with AC’s pronouncement, “LET THERE BE LIGHT!” And there was light.

This is a good piece open with. For one, it starts by displaying humankind’s questioning nature, the search for knowledge and understanding. By asking the Multivac this confounding question, the burden is taken off the humans to A) read or rifle through the data directly, and B) to calculate or establish any connections that may lead to an answer. Those things have become the task of the supercomputer, (the evolving yet incomplete archive itself), the synthesizer of information, and the translator of this information into syntax that is understood by the humans (even if the answer is a frustrating non-answer).

With this, Asimov gives us an example of how data begets data, the ironic paradox of how the ultimate infinite archive – the universe – not only destroys itself, but brings itself into existence. The start point and the end point are one and the same. It is the ultimate labyrinth in the purest definition, which I will talk about more in just a minute. Although the story is set in 2061 and beyond, there are certain aspects that date the piece as it was written in 1956. In conceiving Multivac, Asimov was extrapolating the trend towards centralization that characterized computation technology planning in the 1950s to an ultimate centrally managed global computer. 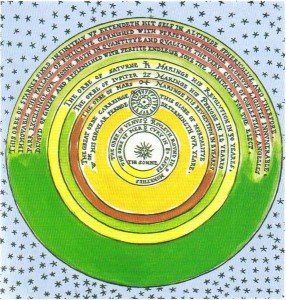 Fig.1: Model of the Copernical Universe by Thomas Digges in 1576, with the amendment that the stars are no longer confined to a sphere, but spread uniformly throughout the space surrounding the planets.

Of course, today centralization has been largely overthrown. Ironically, the computer – or more specifically the advent of the internet – displaced the central control of the sovereign to one of the distributed network: the structural rhizomatic mesh that lacks a distinct center. This could be an instance of complex highly localized economies. For example, as with the favelas of Rio, the fact that the nation state is merely one such authority indicates a system in which plurality of order prevails over its centralization; there is a diffusion of sovereignty. However, we need to be careful in equating decentralization with chaos. Alexander Galloway emphasizes this point in relation to the Internet in his book “Protocol.” From a casual user’s perspective, it’s easy to see the Internet as an “unpredictable mass of data,” and that due to the elimination of centralized hierarchical command – control and order cease to exist at all. Galloway suggests that the reason for this misconception is due to the dialectical contradiction between two machines of protocological control. On one hand you have TCP/IP (Transmission Control Protocol/Internet Protocol) that structure the transmission of data from one computer to another over the network. On the other hand you have DNS (Domain Name System), the large decentralized database that maps network addresses to network names. I would argue that the reason why the internet seems so chaotic is because the process of control is largely opaque to us as average users. The responsibility is taken away from us and placed in the hands of certain agencies. Whether this is a relief or insidious infringement upon freedom is up to you to decide, but the world of hackers and guerilla librarians set forth in speculative fiction by William Gibson, Vernor Vinge, and the like is now very real. In Rainbows End, written after the Google Books project began, library carnage abounds – centered around he digitization effort in the UCSD Geisel Library where books are shredded through a wood chipper and reassembled in digital form, with the gaps theoretically filled in by the contents of other libraries on the second or third round of shredding. What remains unconvincing is that the character behind this charnel digitization project claims he, “has lawyers and software that will allow him to render microroyalty payments across all old copyright regimes – without any new permissions.” That it was so easy seems to me to be the most fictional element of the novel.

//part-two: infinite space and the universe-archive