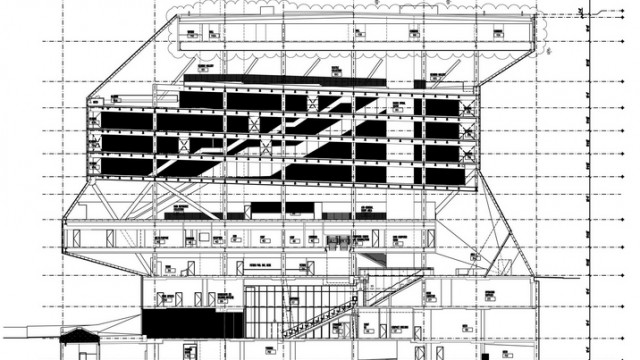 Structures of Navigation and the Syntax of the City (3/4)

(Part 3 of a four-part series adapted from a lecture that I gave at Pratt GAUD, kindly invited by Carla Leitao for her seminar “Architecture and Information Space”)

STRUCTURES OF NAVIGATION and the SYNTAX OF THE CITY
Getting Lost, Finding Knowledge

“Not until we are lost do we begin to understand ourselves.”
—Thoreau

So far, I have discussed the experiential qualities of the labyrinth in the Library of Babel, and its use as a metaphor in the architectural paradox. But the history of the labyrinth is also relevant for discussion. Although both maze and labyrinth depict a complex and confusing series of pathways, the two are different. A maze is a complex branching (multicursal) puzzle that includes choices of path and direction; while a labyrinth is unicursal i.e. has only a single, non-branching path, which leads to the center (here illustrated as the Cretean labyrinth of Theseus and the Minotaur). In one respect we can take the proper labyrinth as the ultimate centralization, vs. the ultimate decentralization of the maze. But in some of these examples, ‘labyrinth’ and ‘maze’ could be used interchangeably, depending on the context.

And why the labyrinth for a library typology? Well, aside from the connection between library and universe, universe and labyrinth – getting lost can be productive for knowledge formation. Just anecdotally – when are you at your most aware state? When the adrenaline is pumping through your blood, when you are experiencing fear, when you are somehow put out of place. Statistically, you are more likely to remember information when you are actively engaged in this kind of state. When you are lost or in unfamiliar territory, all of your senses are heightened, and sometimes it gets hard to filter all of the input. The vehicular traffic, the flow of other pedestrians, the overwhelming visual and auditory stimuli. 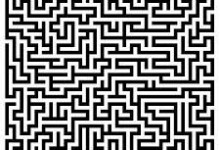 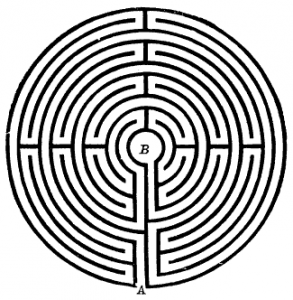 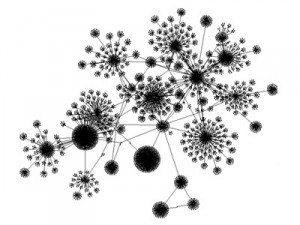 The labyrinth or maze is a good analogy to describe some cities with morphologies of fractal patterns. More than the geometrical pattern itself, city is a labyrinth to the activity of unwitting users. Some cities are the realization of this ancient human dream in the impossibility to conceptualize and experience space at the same time; though sensations and feelings are enhanced, there is no way to know how to get out of them. In ancient cities, the analogy is seen in the network of paths and corridors of its tangible construction, but in modern city, it refers to the attraction and fear that they transmit. In both cases, the same psychological state is produced: confusion, disorientation. In this sense, as stated by Walter Benjamin, the modern citizen becomes a Theseus inside the Minotaur’s labyrinth, reliant on Ariadne’s thread to navigate his way.

Though both are based on decentralization, I would argue that the structure of knowledge and obtaining knowledge as experienced in the syntax of the city is inherently more maze-like than rhizomatic a la Deleuze, or at the very least that the rhizome is an overly simplified and idealized diagram of what the maze produces. Perhaps each point in the rhizomatic node contains within it a complex maze. There are boundaries and obstacles, impenetrable walls (or firewalls), that must be navigated and taken into account.

Coincidentally, the structure of the city and the syntax of language have much in common. This is made very clear in Karinthy’s beautiful novel Metropole, which was written in 1970 but was only translated into English in 2008. In something of a Kafkaesque nightmare, after boarding the wrong airplane, Budai finds himself lost in a city where the language is utterly incomprehensible to him, and as a Hungarian linguist who can speak a dozen languages, this is incredibly frustrating for him. He can find no indication of where he is on the globe, and can barely communicate even through gestures, to what are presumably the citizens. Budai reverts to familiar structures within the city to attempt to unlock the code of the language. He tries the telephone book, dials the numbers and attempts to communicate with people on the outside, but to no avail. He then tries the train station and its corresponding map, directives which transcend language. Budai finds ways to navigate the disorienting labyrinth of the unknown city, although he never manages to understand anything. The Kafkaesque nightmare progresses to the point where Budai becomes utterly assimilated into the world, functioning as any other member of the proletariat, and understanding seems no longer important. Language is still impenetrable – words that meant one thing one day seemed to change meaning the next. (Of course, this is the rationale of totalitarian regimes, and though at no point in the novel does the author mention Hungary as a client state of the Soviet Union nor the Hungarian uprising of 1956, the novel is filled with subliminal connections.) However, what makes this novel relevant to the archive is that Budai’s encyclopedic knowledge has been rendered useless by the labyrinthine city – syntactical structures are undermined.

This is precisely how Michel Foucault describes the mechanisms of the heterotopia, in the preface of The Order of Things:

“Heterotopias are disturbing, probably because they secretly undermine language, because they make it impossible to name this and that, because they shatter or tangle common names, because they destroy ‘syntax’ in advance, and not only the syntax with which we construct sentences but also that less apparent syntax which causes words and things (next to and also opposite one another) to ‘hold together’.” 10

In summary, Foucault’s heterotopias are spaces that provide an alternate mode of ordering while paradoxically remaining both separate from and connected to all other spaces. I want to focus on the Fourth Principle: that of heterochronicty.

“Museums and libraries have become heterotopias in which time never stops building up and topping its own summit.  … the idea of accumulating everything, of establishing a sort of general archive, the will to enclose in one place all times, all epochs, all forms, all tastes, the idea of constituting a place of all times that is itself outside of time and inaccessible to its ravages, the project of organizing in this way a sort of perpetual and indefinite accumulation of time in an immobile place, this whole idea belongs to our modernity.”

Foucault has a distinctly spatial understanding of knowledge as emerging from a clash of forces. Like the narrative based on antithetical concepts, Borgesian fiction derives its strength not from individual elements but from strong contrasts – juxtaposing rigid spatial enclosure and infinite void, spaces that repeat horizontally and shafts that thrust vertically, a labyrinthine claustrophobic interior and a tessellated boundless sphere. From the inside the Library is incomprehensible based on a complex route and identical spaces. But as a whole, it has a geometrical logic that makes it intelligible at an instant. In two dimensions it offers a sequential and fragmented experience. In the third dimension it provides a glimpse to the large scale. The distinction between threading the Library and knowing it as an entire construction, between the partitioning of the plan and the unifying character of the section, expresses the difference between sequential experience based on movement through space and simultaneous apprehension of spatial relations. It is related to the ways we derive our knowledge about buildings: as sequences of spaces accessible by the senses and as conceptual frameworks connecting these sequences into larger systems of order. So, by this definition the library-archive is a heterotopic/heterochronic architectural site of liminal imbrication, in which systems collide and overlap to create an intensification of knowledge.

The correspondence between language and architecture, narrative and representation, that Borges creates shows that spatial configuration can have not only syntactic but also semantic significance. Using architecture as a mirror to literature Borges enables us to look at both disciplines through fresh methods of interpretation and cognition. He shows that in spite of their differences, both relate the perceptual systems we reach with our senses with the conceptual systems we access with our intellect.

So, in the same way that built architecture makes concepts collapse, spoken or written language too makes concepts collapse. But here we are presented with another way to subvert the paradox of the labyrinth-pyramid: the heterochronic liminal space of the archive which INHERENTLY makes the mind a part of the space, as connections are made to produce knowledge. So too, heterotopias are simultaneously physical and mental. The archive as a typology, along with the words and works of fiction themselves (from Borges to Vinge) does what the library as an object Building alone cannot do – through imagination it allows architecture to exist beyond the finite particles of the physical world. It is not solely a metaphysical issue, but one that intersects political, social, economic pressures and productions. The library-archive is the ultimate liminal space of knowledge production. As a reader, liminal space inhabits us (our minds) as much as we inhabit the physical space of the library. 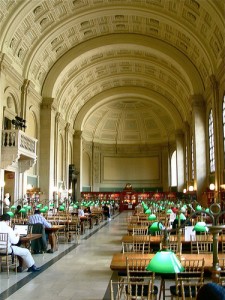 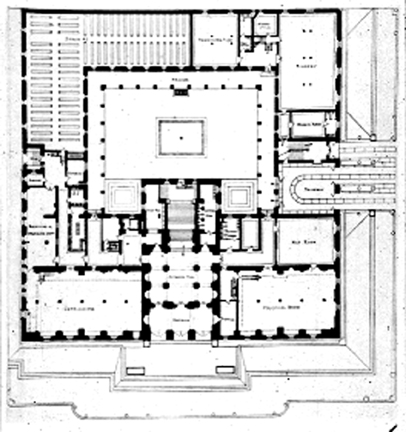 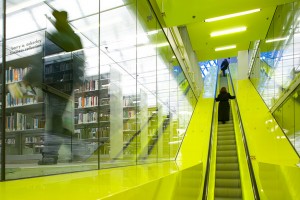 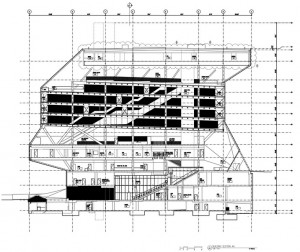 To give a tangential example, I can talk about cognitive mapping, perception, and navigation. In some buildings, the navigational strategies people use and the quality of their cognitive map may not matter very much. Inside our own homes, or on our familiar walk to school or work every day, we may appropriate the world in a state of distraction. However, if we are in unfamiliar territory, we may be extremely attentive. To bring the discussion back to physical libraries as a constructed building – I want to contrast the Boston Public Library with the Seattle Public Library. Built in 1895, the McKim building has an obvious structure with long lines of sight. It is easily appropriated at first glance, in which case the users don’t have to rely much on any internal representations. The Koolhaas building is something entirely different, and is indicative of how the typology is evolving toward the labyrinth. Visitors complain that it’s difficult to navigate because they have a certain impression and expectation that the floors should have similar plan layouts. But, as you probably know, the first five levels of the library are all different; the exterior walls don’t align. Escalators skip levels of the building. No immediate spatial assumptions can be made, and as such the user is kept at a state of heightened awareness which, presumably, better facilitates knowledge production.