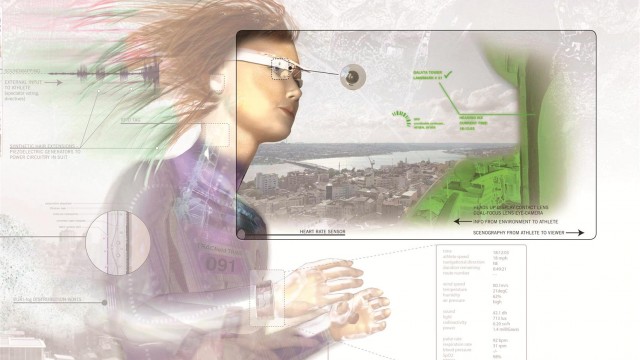 Abstract:
For decades, the Olympic games have been used as leverage in cities to generate tourism and to fund infrastructural developments. In actuality, the event more often leaves a disproportionate amount of damage in its wake – environmentally, financially, and infrastructurally. The central problem of the Olympics is that while technology and culture continue to evolve, and while performative limits are transgressed each day, the fundamental nature of the event has remained stagnant. This calls for a rigorous reconceptualization of what the event should not only be but do, responding to a long history of the Event in architectural discourse. This project adds to that history with the hypothetical Summer Olympics 2028: version 2.0. Here, an assertive position is taken by regarding architecture as pure-program, defining new modes of inhabitation not necessarily bounded by walls but embedded within existing networks and infrastructure. This is ultimately an architecture predicated on moving bodies shaping space as a physical medium, and conversely space influencing the relationships between humans and their environment.

By imbuing the event with purpose and intelligence, a direct link is formed between the games and the city. The goal of the TRACfield TRIAD (an acronym for Transient Responsive Actuating Connector, and a spin on the traditional triathlon) is to create new intersections and traces in the city via the athlete as agent, to assesses and measure the interaction between the body and the city’s visible and invisible obstacles, to deploy, inform, respond, and remediate. These effects will last long after the games end, with careful planning long before they begin. This redefines the role of the architect as a collaborator with politicians, economists, environmentalists, researchers, academics, and sponsoring agencies. The prior stagnancy of the event is eradicated in favor of a new sentience, creating a multiplicity of perspectives for participants of local and non-local destinations in a radically new and dynamic way.

[To read an athlete’s perspective in these hypothetical games, continue on here.] 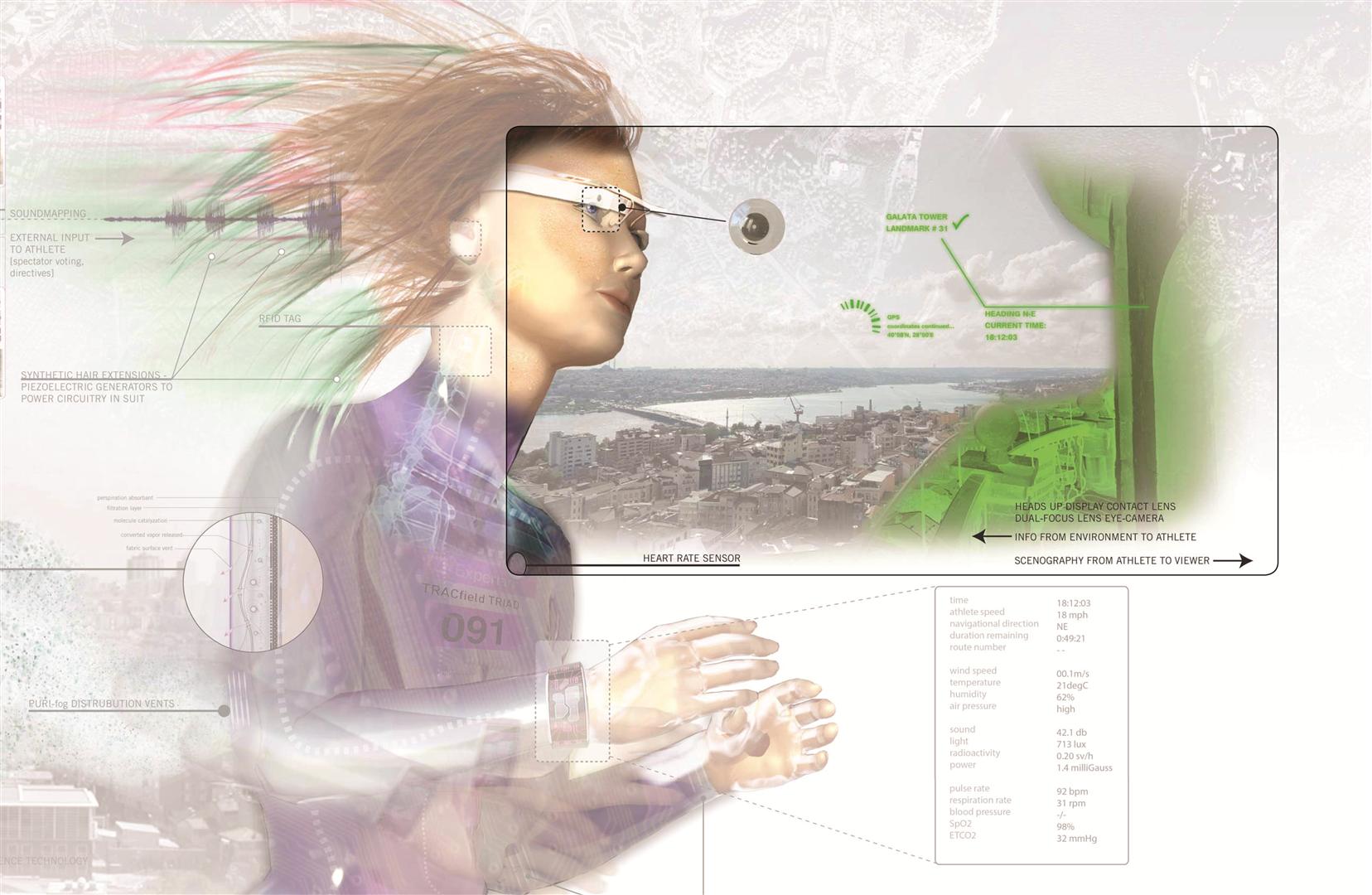 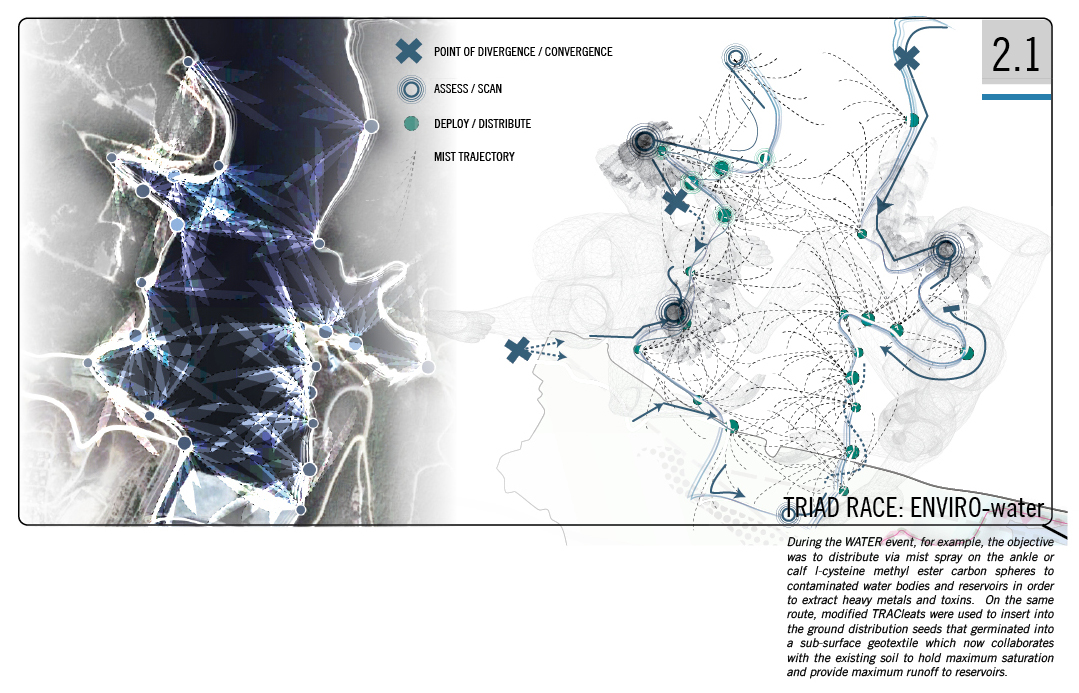 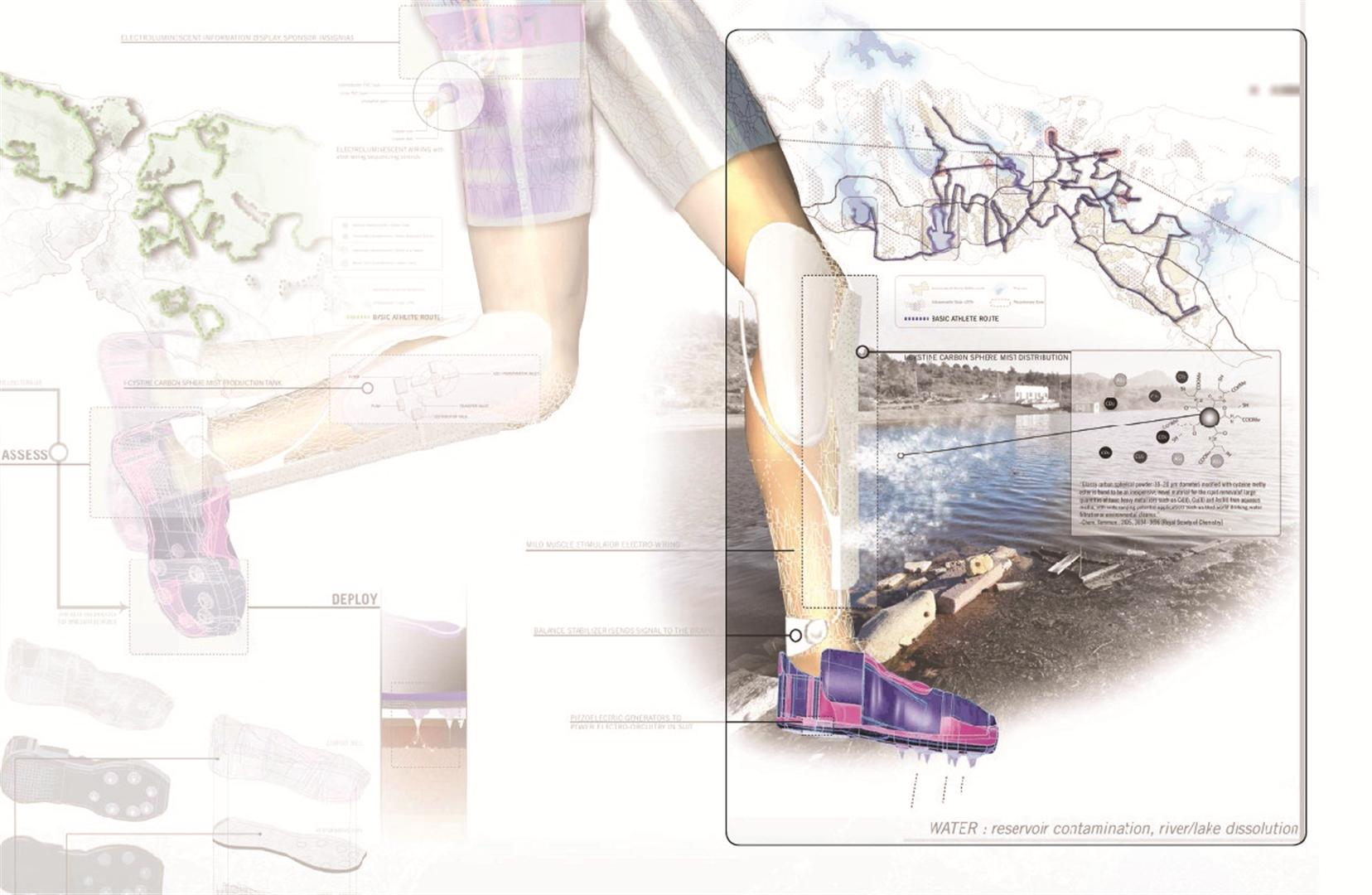 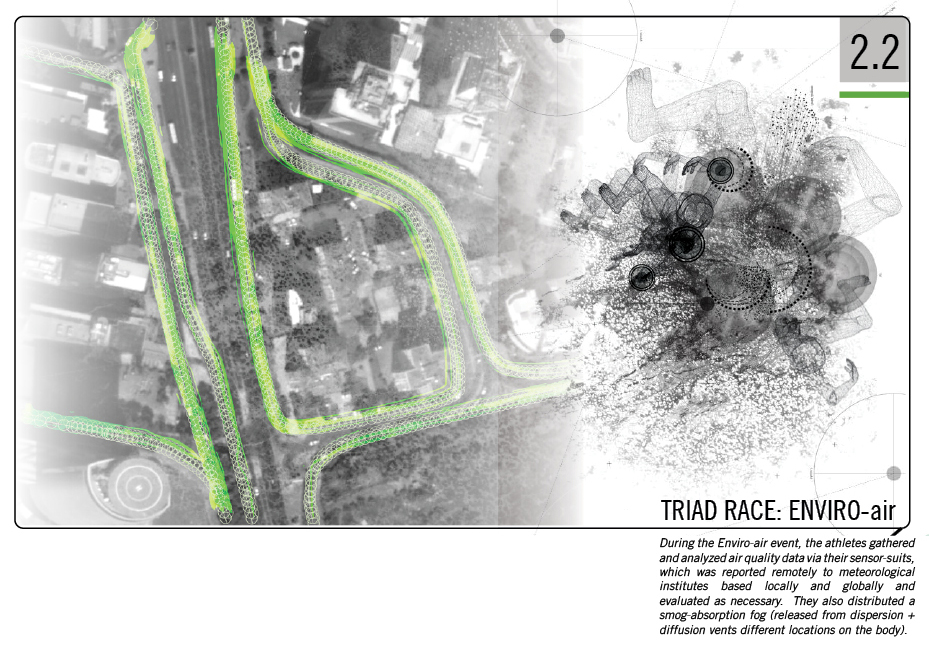 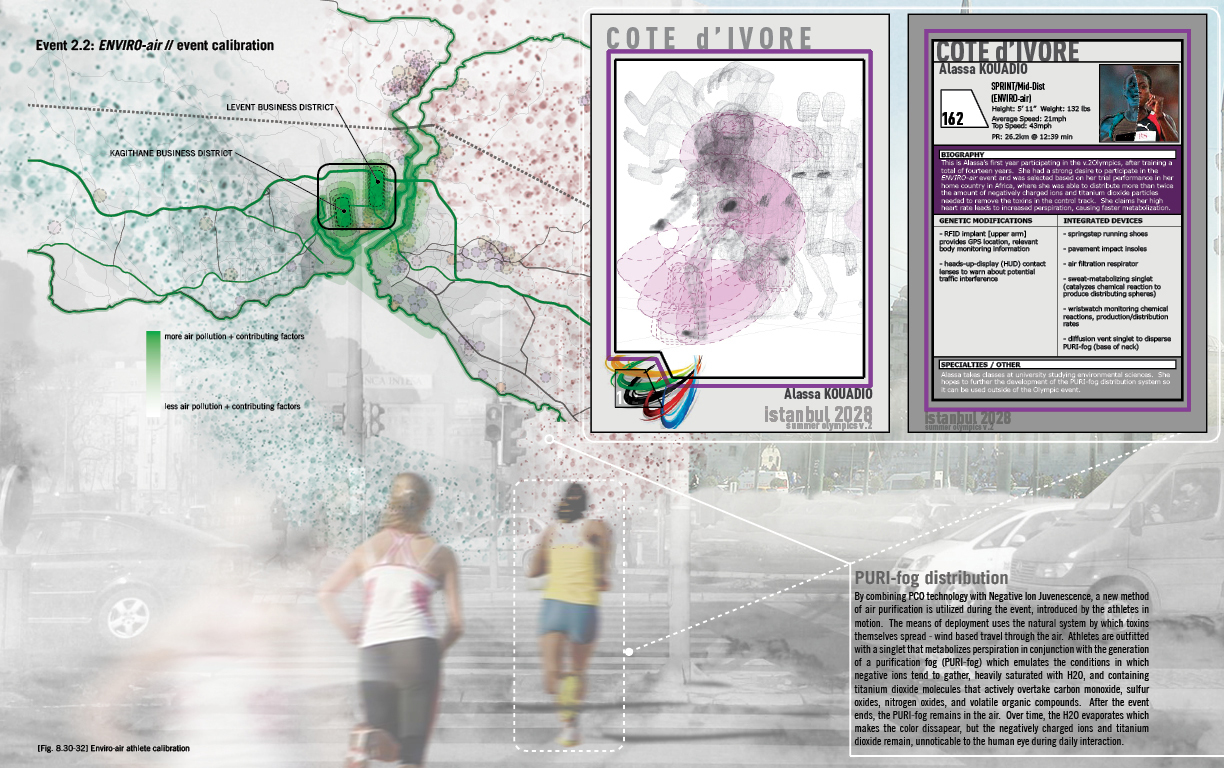 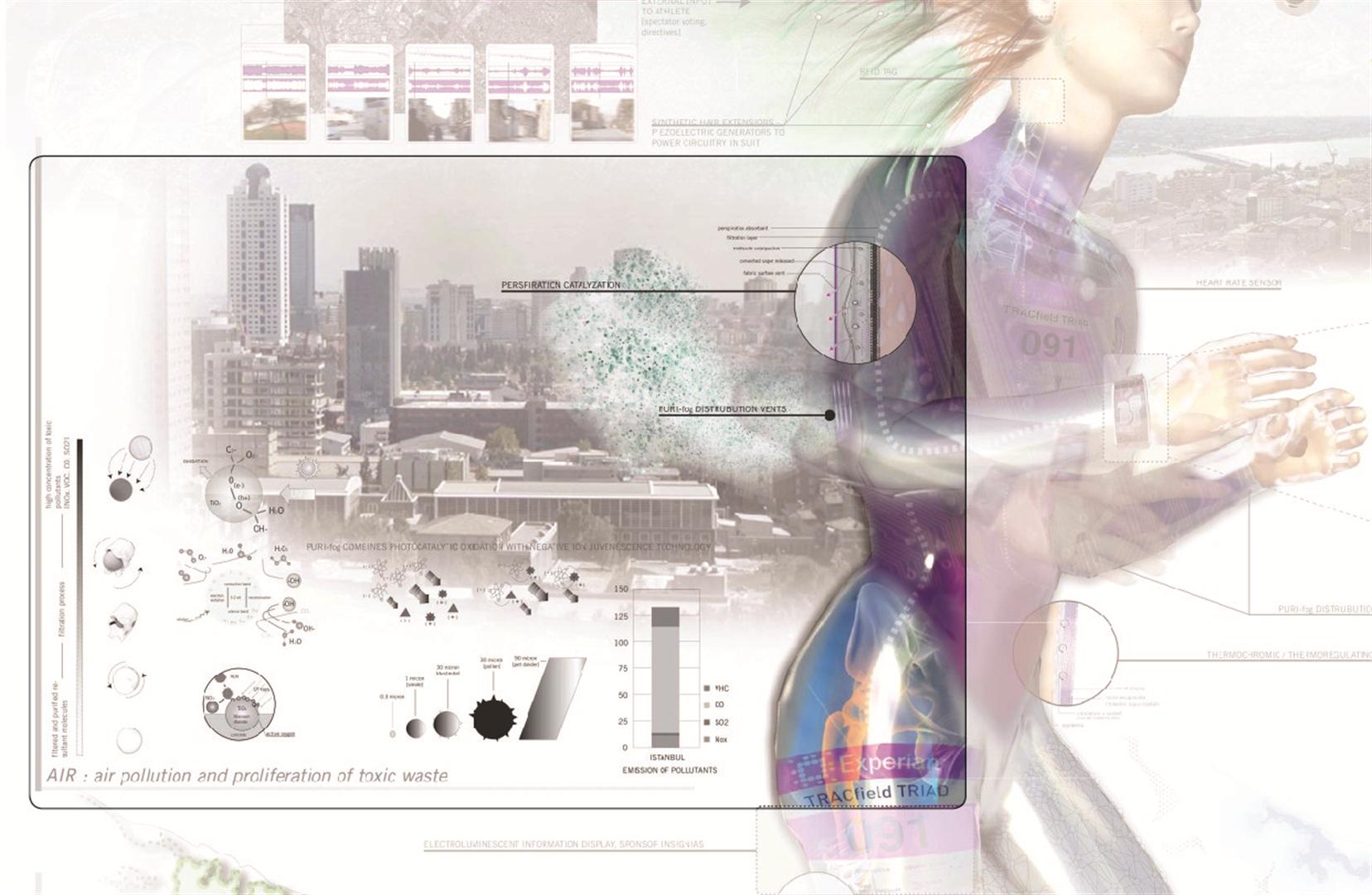 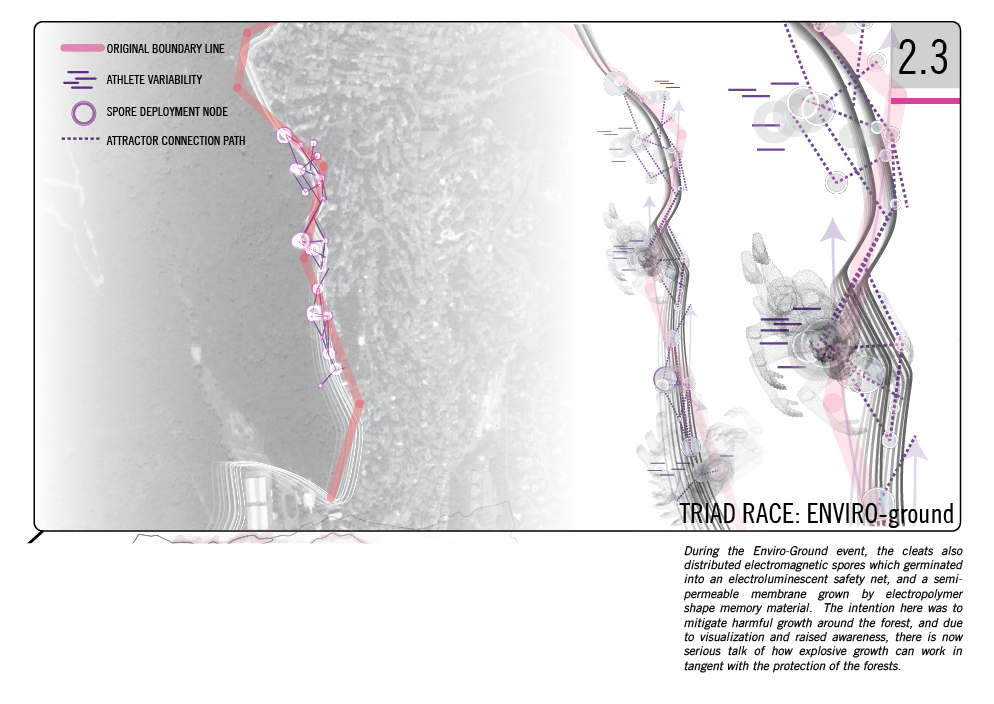 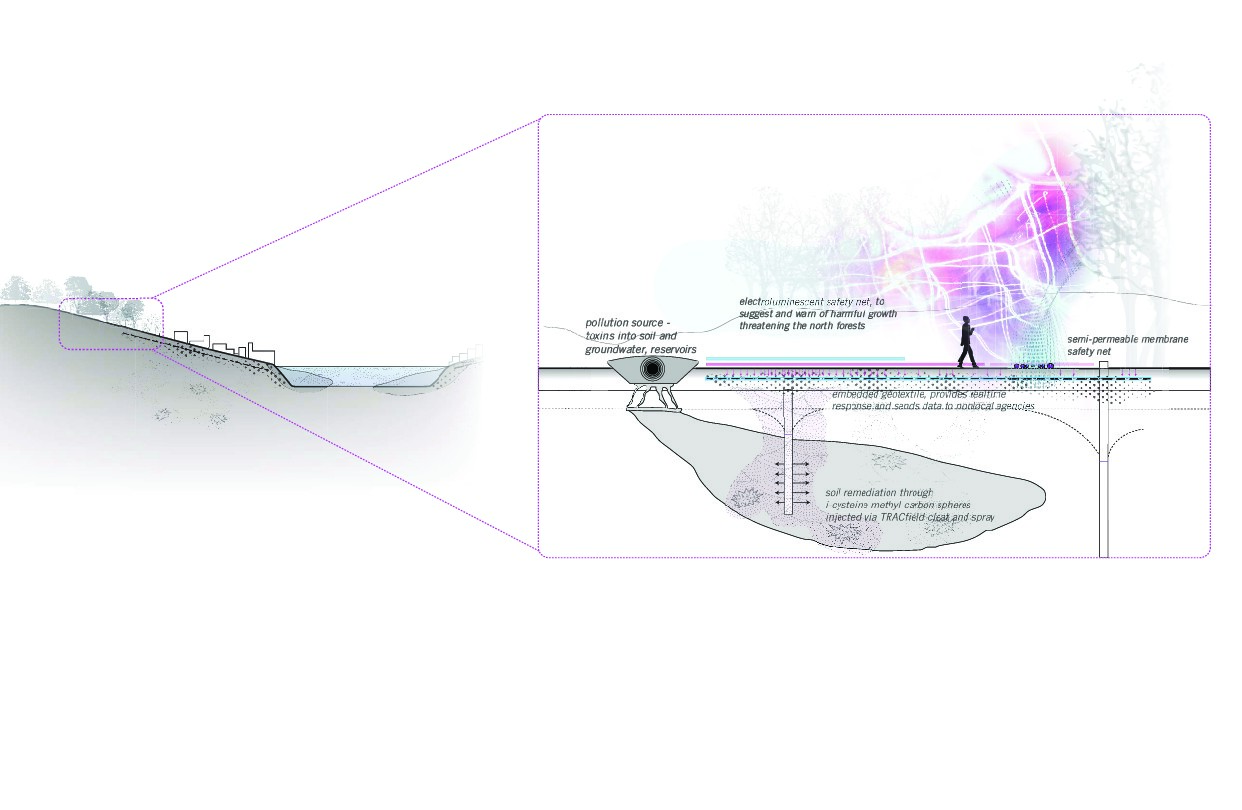 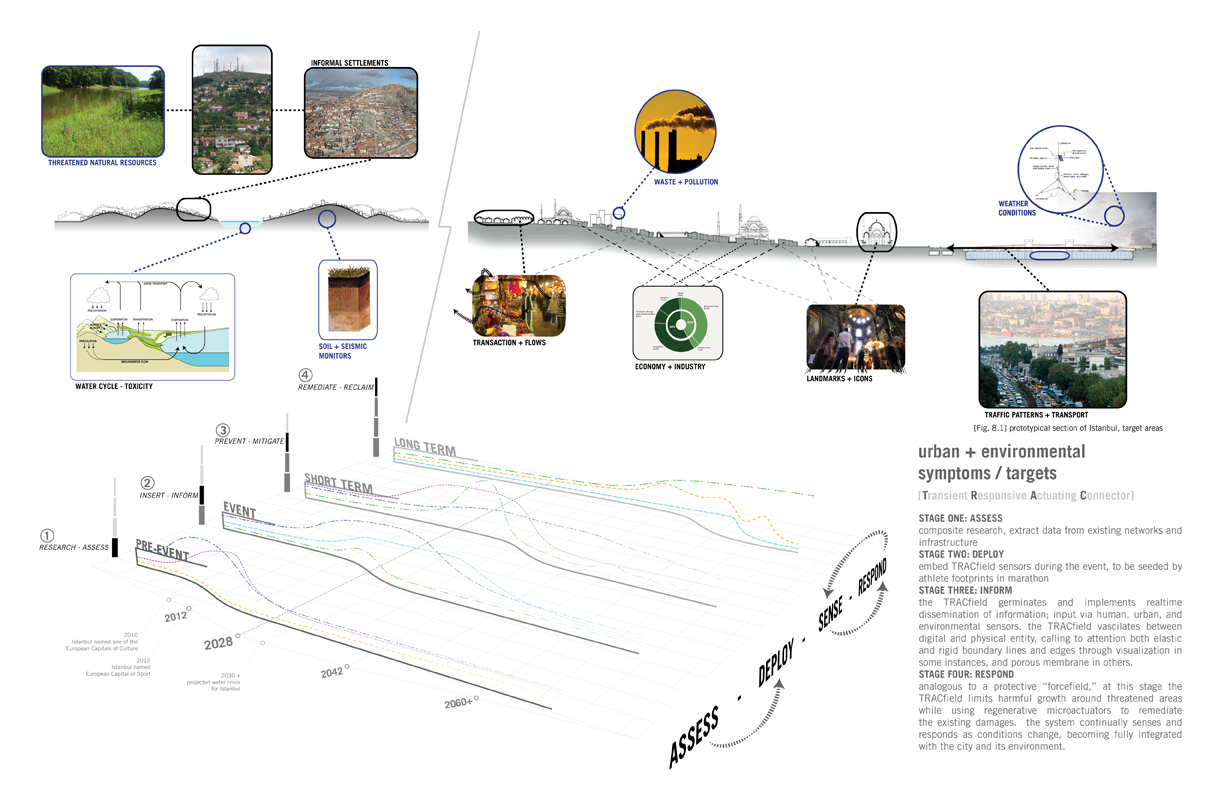 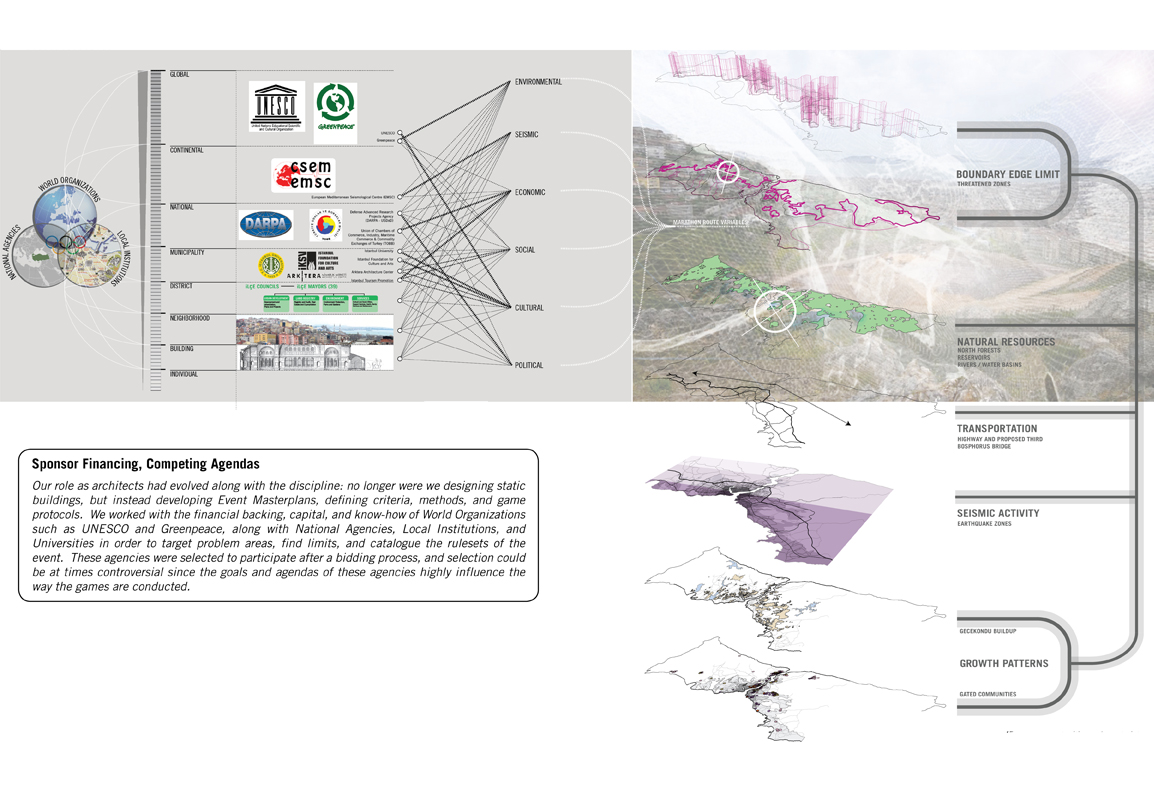 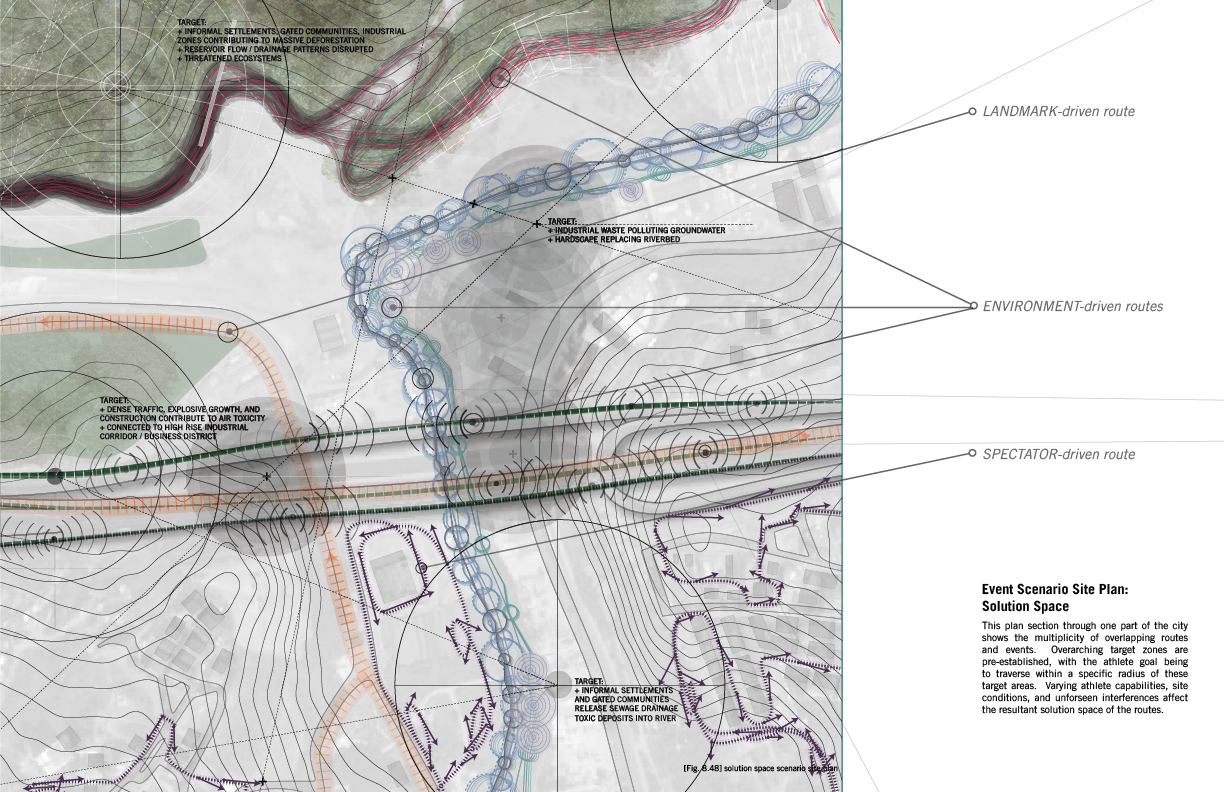 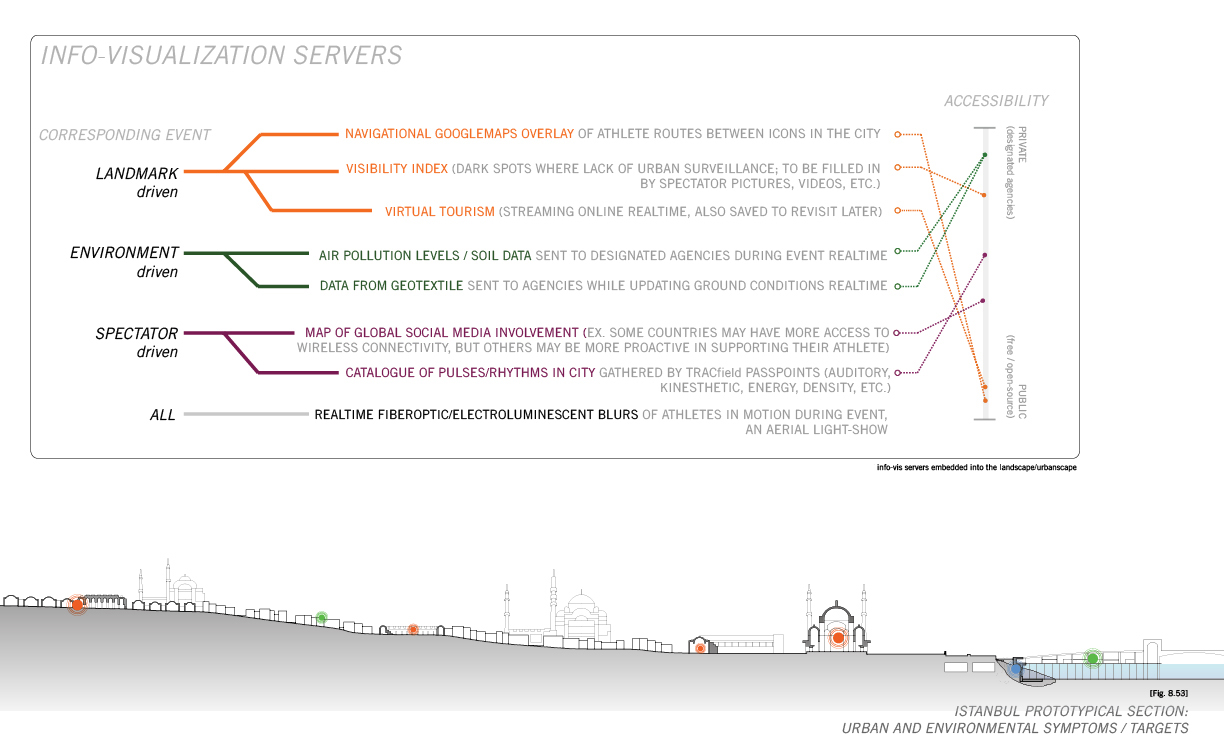 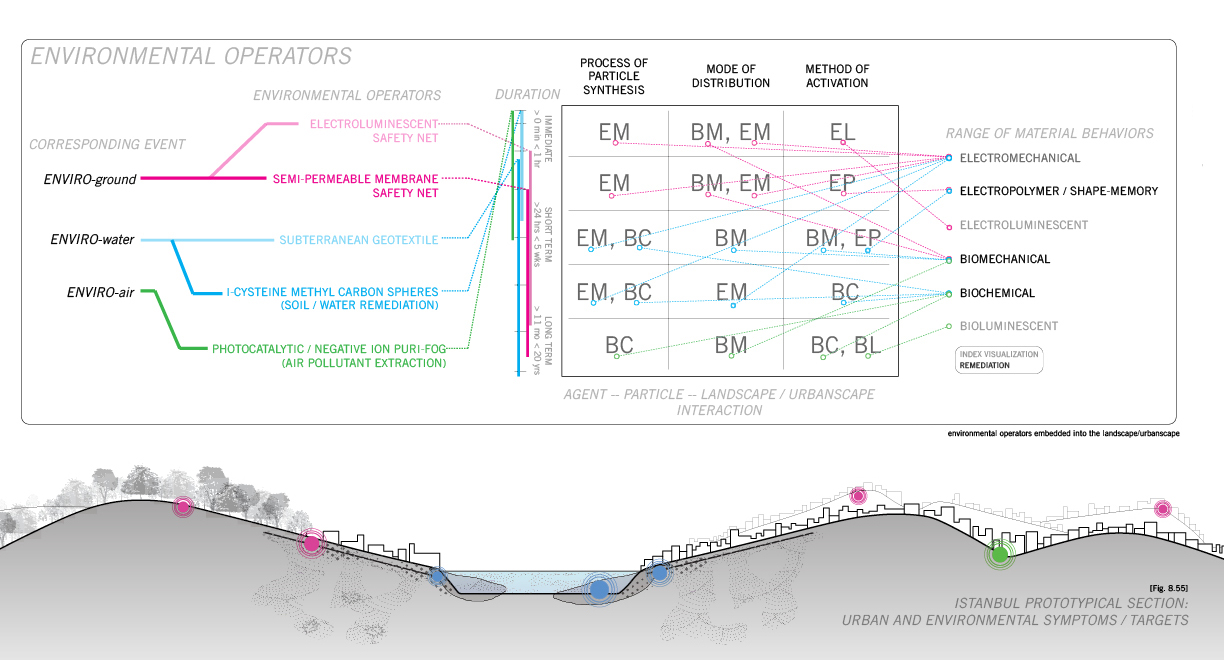 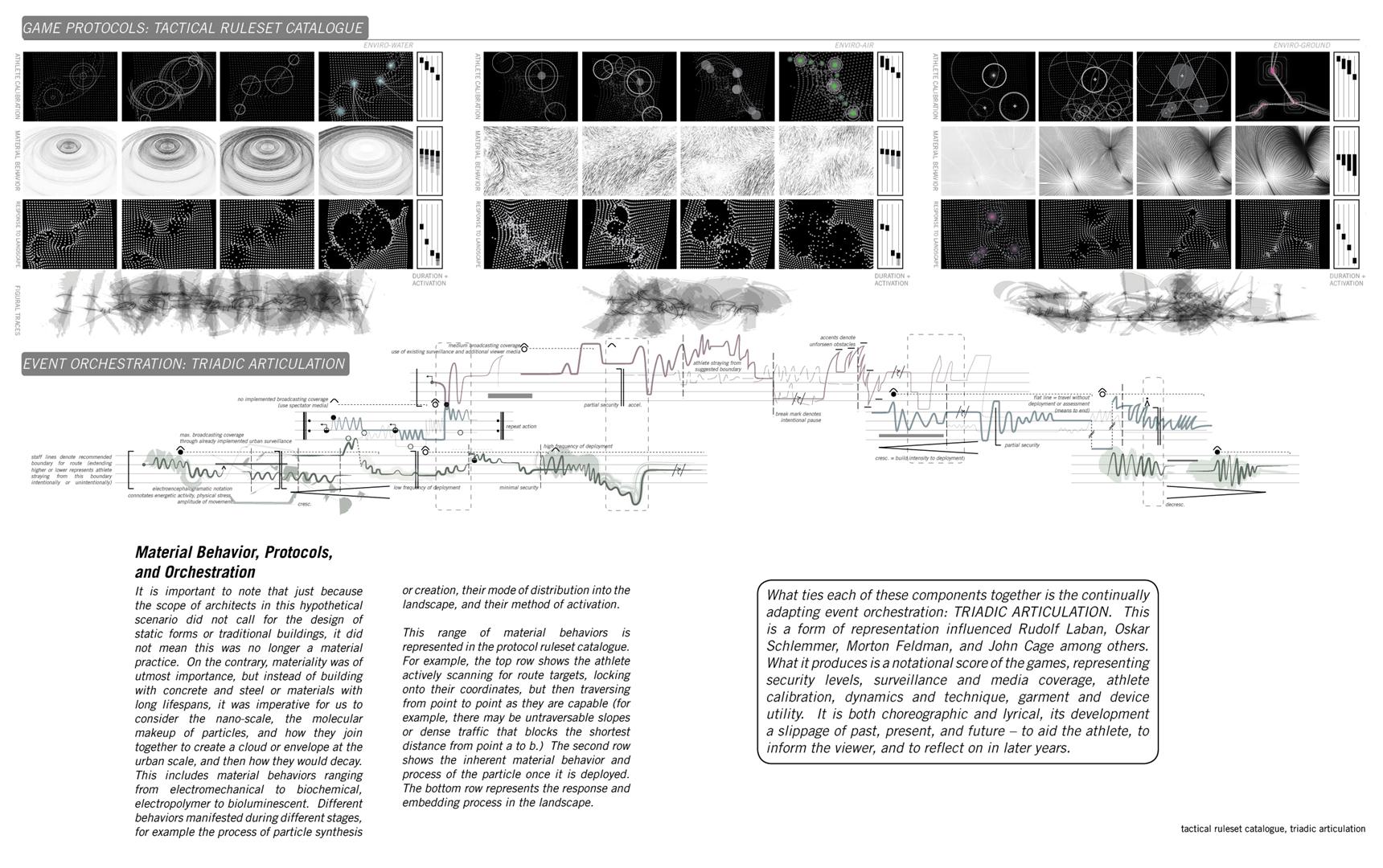 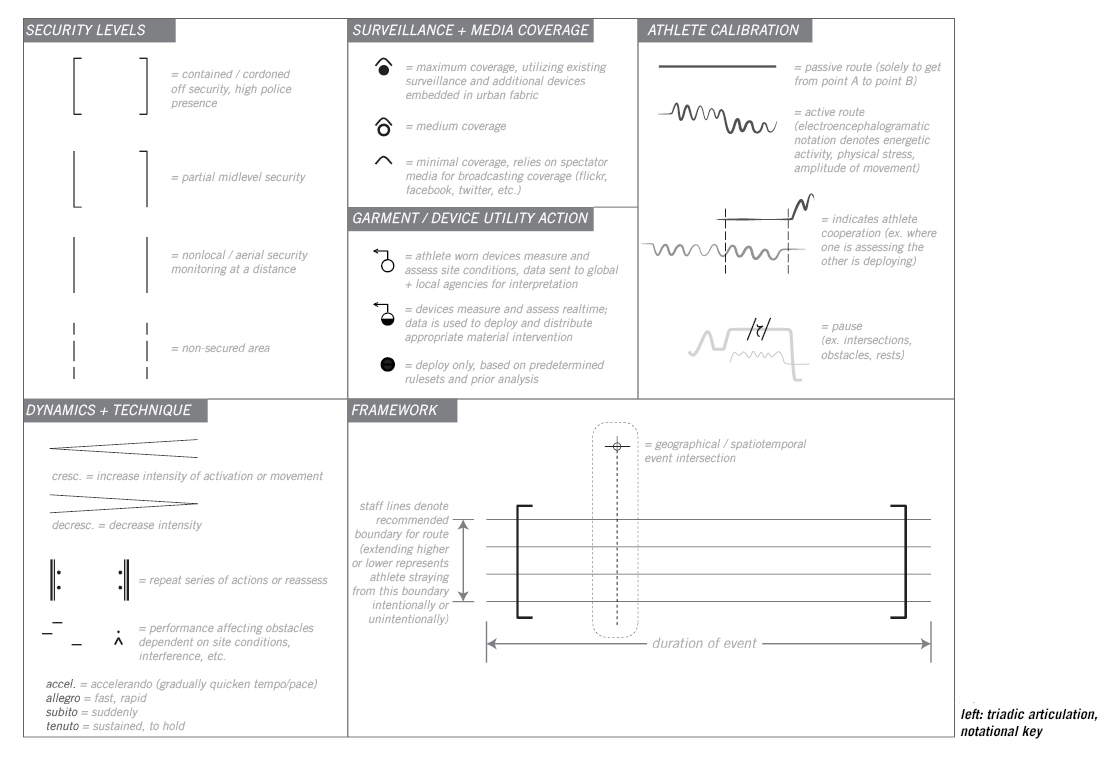 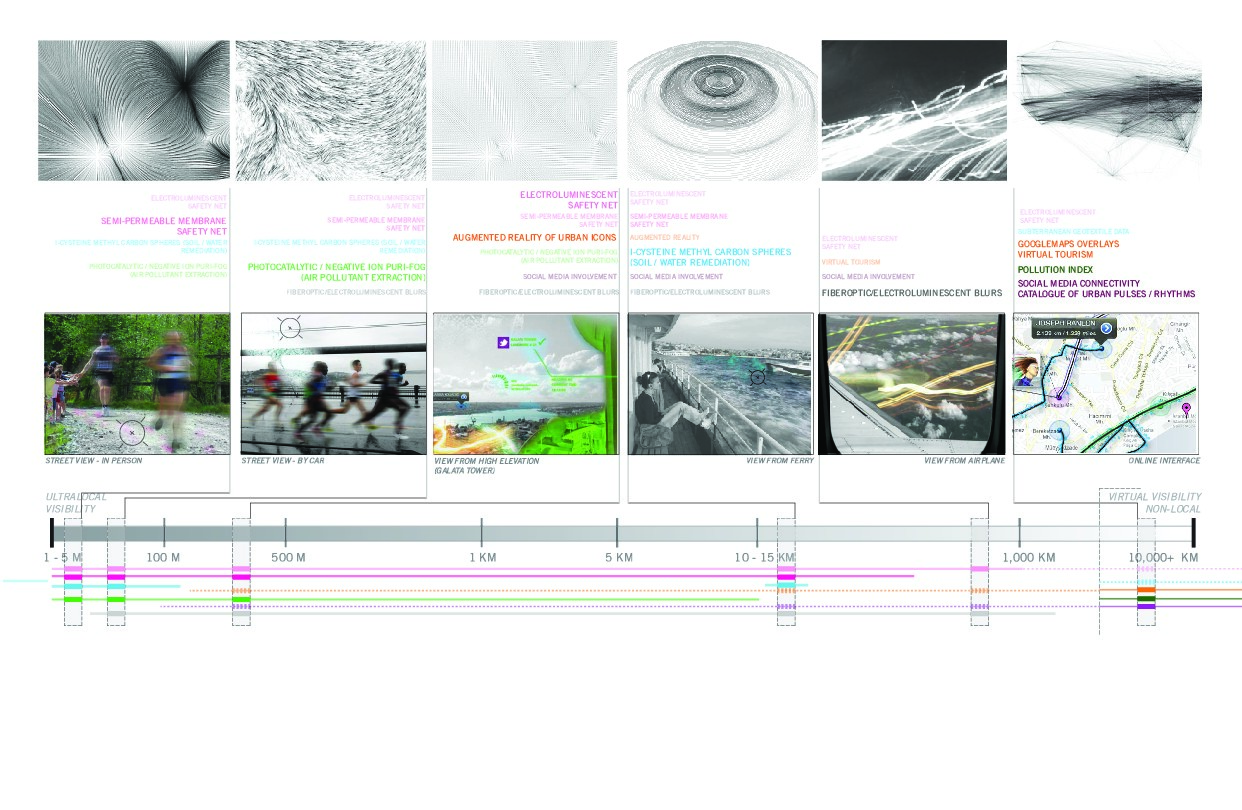 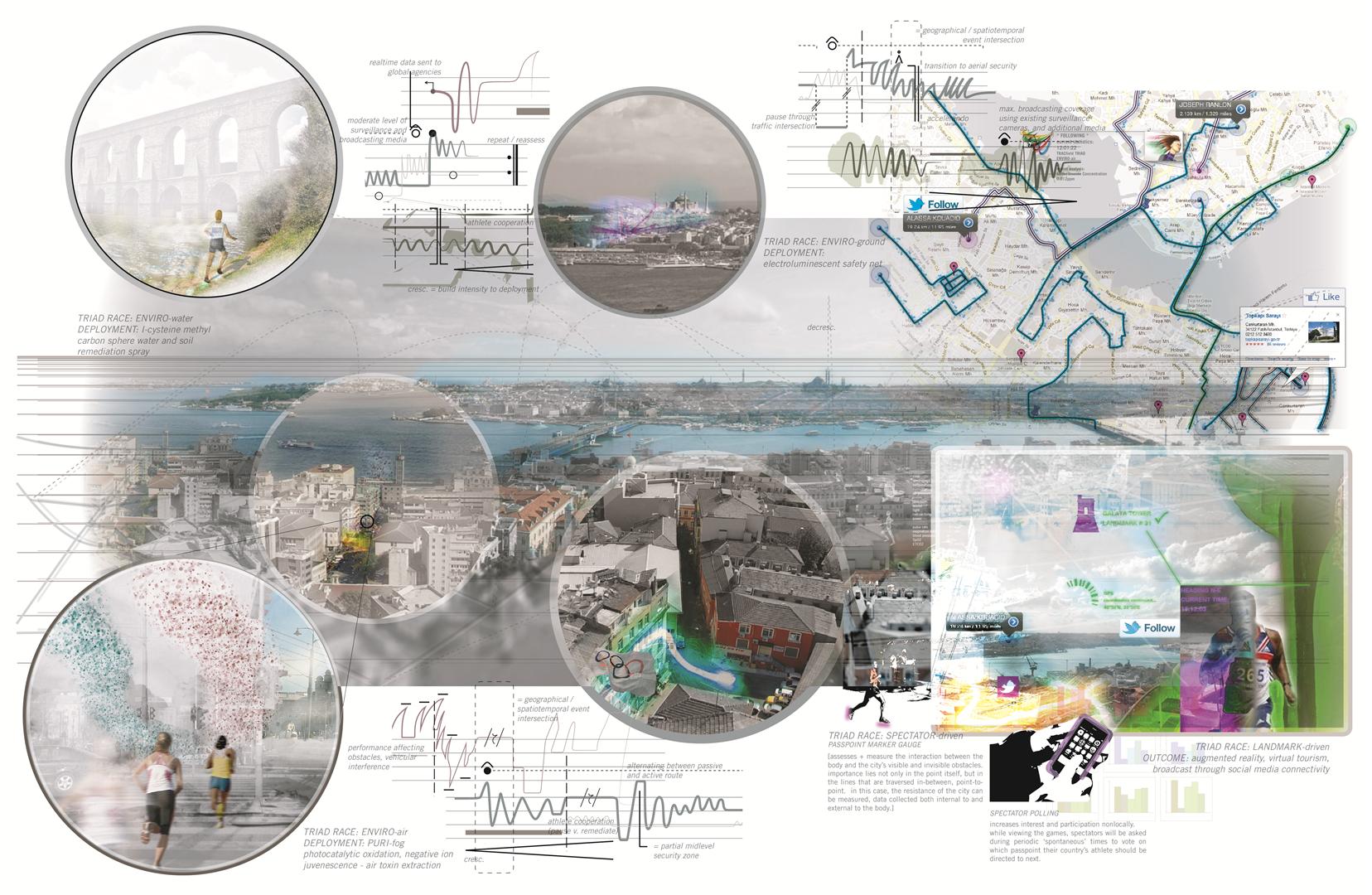 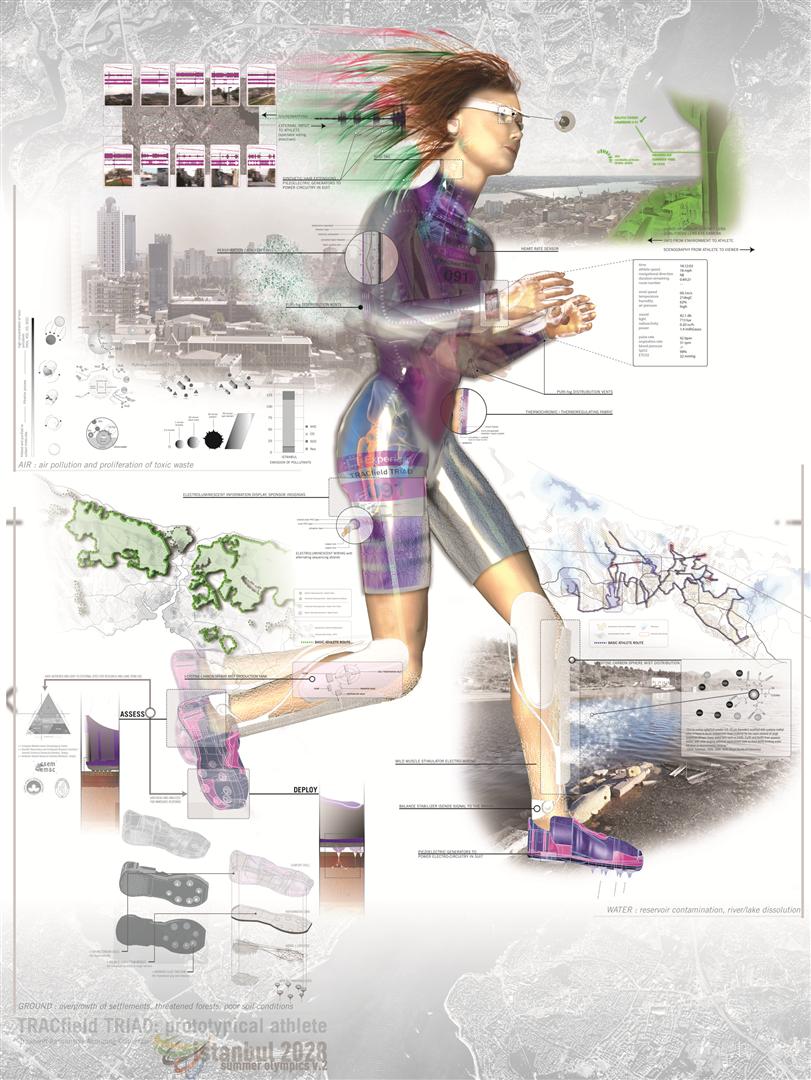 The following is a synthesis of the feedback and discussion that resulted from two days of reviews, in an attempt to step outside of the project and unpack it in a self-critique.

What does it mean to produce an event?  Although the concept of the cyborg-athlete is an extrapolation of existing technologies and conceivable future technologies, the game changer itself is the changing of the games.  This leaves the realm of extrapolation and enters into the invention of a fundamental reconceptualization of athletics.  This reconceptualization begs a question that can be addressed in several ways: what constitutes the ethic of the game?  Where does tradition hold and where does it break down?  Several different layers of feedback are possible in this system such that there may be different kinds of betting pools that emerge around the event.  This establishes a vast secondary market, while engaging with existing and evolving economic models.

Additionally, the branding of technology promotes an increasing awareness of financial monitoring.  The financial systems that support the Olympics are intended to be productively undermined, in a feedback loop of spectacular control through media.  This project defines the event as irreducible in time.  This suggests the notion of a monotonic time continuum.  The event as defined in the project operates across mechanisms of capital, a predetermining framing of the future to attempt to challenge or undermine.  Also implicit is the semi-agency in which financial sponsors can be nested, a scenario in which agencies like Greenpeace can travel, but where other agencies may conceivably move in.

One could argue that the Olympics are the most institutional form of sport, primarily the most stable, fixed, and funded event at a global scale.  The tradition of the Olympics holds strict standards against performance enhancement in order to refrain from giving any unfair advantages, making it one of the only events where socio-political differences are set aside to establish an ironically even playing field.  The project addresses this irony by not only transforming but potentially threatening what we identify with as an institution.  By suggesting there may be no even playing field, a moment of subversion arises, exposing explicitly the way things are by using the event as a societal mirror.  To push the boundaries even more, we may consider the notion that in the future there will be no distinct Olympiad-types, but rather everyone and anyone may have the potential to compete with the assistance of devices and modifications.  However, as soon as this gap collapses, it will find a way to be again widened, once the hybrid human-cyborg finds advanced skill to calibrate such devices.

Perhaps most importantly, the recurring theme of the ‘game change’ is implicit in this project at a disciplinary level.  The role of architecture in the Olympics, to date, has remained in a history where architecture is synonymous with solid, static built forms.  This project attempts to expand the discipline by eliminating the need for such wasteful construction.  Instead, it defines architecture as the creation and manipulation of space through the interaction between body, land, and evolving urban networks.   Architecture remains an intensely material practice, but instead places a new focus on the nano-scale, the molecular makeup of particles, how they join together to create a cloud or envelope at the urban scale, and then how they would decay over time.

From here another question arises: does the frame of the Olympics enable the larger ambition?  The potentials exceed the format of the Olympics, which are used as a test.  Out of this test, an ethos may emerge and be disseminated across the general population.  At the same time, this project acts as a commentary on advancements of technology used for sinister means.  Gaming is not innocent, and this project has the capacity to expose such transgressive tendencies.  There is a darker side that operates below the surface which exceeds the limit of the games and extends to the world at large.  Conversely, the project extends a benevolent hand to recognize the flaws in our treatment of nature, linking the ecology to new materials and machines to replenish the environment.  This is accomplished through the body as perpetual machine, joining with multiple bodies in a swarm of agents.

This event addresses but exceeds the society of the spectacle, occupying a space between the symbolic and the instrumental.  It is simultaneously disembodied semiology and personified signifier, predicated on athlete calibration as agency.  It considers spectator appropriation as the aestheticization of interwoven performance and multisensory spectacle.  From here, atmospheres appear as unpredictable indicators of certain environmental indices, and a new alchemy of systems that we often see as disparate and autonomous become realigned.  This is made possible due to the evolving role of architecture as set forth in this thesis.