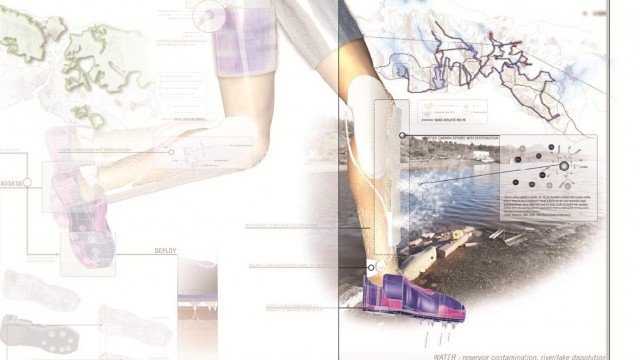 This post is a companion piece to The Sentient Event.

I knew the rules of the game going into it, backwards and forwards.  I could rehearse them in my sleep.  Be the first one to cross the finish line.  Simple enough.  But getting there…that was the challenge of the TRACfield Triad.  As I fasten the smooth clasp on my shin guard distributor, I’m reminded of why I wear them in the first place.  During qualifying I was not only awarded a spot on my country’s team, but I apparently impressed a wealthy sponsor, BachOvermann.  I don’t know much about them.  I think they specialize in alternate energy, but they could just as well be a huge corporate conglomerate.  They claimed my ‘short turning radius between steps’ made me well-suited to distribute the remediation spray during the ENVIRO-water event.  So they supplied me with the latest equipment and sensor uniform.  I’m talking military-level-never-before-released-technology.  It’s hard to name all of the stuff they gave me because it just seems like a part of me now.  There’s the top of the line dual-focus contact lens heads-up-displays, electro-pulse balance stabilizers, and of course piezoelectric generators to power the circuitry in my suit.  The springs in the back of my cleats took the most getting used to, and I had to train for weeks just to get the hang of them.  But now they’re my biggest asset.  Sure, they give me an advantage over my opponents, but hey, all’s fair in love and war…and the Triad.

I’m replaying the last event in my head, picking apart my performance step by step.  When you’re in the race, everything narrows to the task at hand.  It’s tunnel vision, but there’s input from all around.  Auditory, kinesthetic, visual.  You have to know how to filter, read, and assess.  It all comes back to me:

As I run a passive line to the next target, I draw in deep breaths of air to prepare myself.  My wristwatch alerts me that my pulse rate is 168bpm, and the sweat that runs down my neck collects in the fabric of my suit to metabolize into remediation spheres, at a rate of – I check quickly – 42%.  Not bad, not great.  About four meters ahead of me I see the telltale markings of another competitor through my augmented reality lenses, footprints that show where she has already distributed the carbon spheres.  I match it up with the target location and realize I have a challenge cut out for me.  I need to deploy at the reservoir basin, but the slope is so steep I’m unsure if I’ll be able to follow the route.  I reflexively make the decision to change course, my knees bracing the impact from the change in surface of sandy soil to bedrock.  My shoes are an extension of my body and I swear I can feel them actively assessing the soil, sending the data to wherever it needs to go.  On the haze of the periphery I noticed an enthusiastic group of spectators cheering from behind an invisible but effective electrified fence.  I want to give them at least a nod of acknowledgement, but my focus and resolve is intractable.  Right now the cleats are retracted to avoid the large stones in the path, but I have to time it exactly right if I want to be able to deploy the spores just feet away.  If I don’t, I run the risk of being disqualified.  All of a sudden, time seems to switch to slow-motion.  That’s my brain prosthesis kicking in due to the overfiring of synapses.  It’s a damn blessing too, because a millisecond later I would have gotten the tip of my toe caught in a small hole, sending my ankle twisting ninety degrees in the wrong direction, and the event would have been blown.  Instead, I notice the hole and adjust the angle of my torso in respect to my hips, lifting up my calf and sticking my landing exactly where I intended.  There’s a metallic taste in my mouth and I realize I accidentally bit my tongue on the landing.  Regardless, a small but pleasant tingle rushes through me, and I’m unsure if it’s just me internally congratulating myself, or if it’s the electro-wiring muscle stimulation kicking into gear.