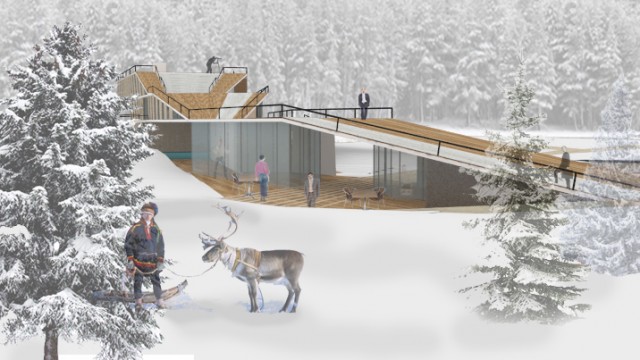 The conceptual framework for this project is generated around how the aurora borealis forms, an important phenomena in Finland. The aurora borealis is caused by solar winds which are atmospheric responses to magnetic storms. The solar winds interact with the earth and actually distort the magnetic envelope, which causes geomagnetic field disturbances, and creates voids. This condition of collision, distortion, and field disturbances manifests itself on the site to create up and down movements in section, and intersections at points of canted rotation where students, tourists, teachers, locals, and astronomers meet to different degrees of control.  There are two angular movements across the site which collide to create a void. Within the void is a performance space which shares program with the observatory and language center, becoming an integrated part of the landscape. The one main platform houses the continually inclining platform to the observatory, standing for the new technology. The other connects the site to the wider town of Inari, to traditional Sami points of interest including the SIIDA museum and the schools.