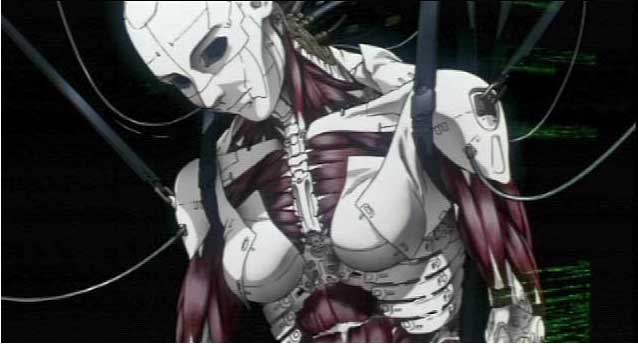 Ghost in the Shell and the Evolution of Inhabitability

Ghost in the Shell and the Evolution of Inhabitability

The 2004 animated film Ghost in the Shell 2: Innocence, as well as its predecessor in 1995 provokes us to reconsider the dialectic between mind and body, as well as the Deleuzian dialectic of the virtual and the actual.  In the film, physical reality is no longer distinguishable from the digital.  The mind is no longer housed within the physical body.  Consciousness can be uploaded, including memories, for example when Batou says: “There is no way to distinguish reminiscence from true memory. Whatever they are, they can only be analyzed after the fact. The passage of time itself can’t be stored, so it’s tough, and inevitable, now that our e-brains share external memories.”1  This has a variety of implications for architecture in terms of the continually evolving concept of inhabitation.

The environment in Ghost in the Shell is a realm that results from the intersection of millions of vectors composed in a dense matrix, representing the tensions between the interest of human and artificial intelligence.  As a result, the creation of these material-semiotic networks remove Homo sapiens as a species from its previously privileged position in terms of cognition, meaning, and information.  Ghost in the Shell is not the first film to address issues of trans/posthumanism, information, and embodiment.  From Kubrick’s 2001 to The Matrix, science fiction has been predicting the end of human existence as we know it for years due to the exponential growth of technology.  Foucault’s refers to it as the ‘death of man,’2 Bruno Latour the ‘birth of non-humanity.’  Paul Virilio calls it the “automation of perception,” supported by a statement made by Paul Klee in his Notebooks – “Now objects perceive me.”3  While this is so, I would argue that this does not represent an end of an era, but rather a new point on the evolutionary continuum.  This is expressed clearly in the film when Togusa explains to Batou:

In this age, the twin technologies of robotics and electronic neurology resurrected the 18th century theory of man as machine.  And now that computers have enabled externalized memory, humans have pursued self-mechanization aggressively, to expand the limits of their own functions.  Determined to leave behind Darwinian natural selection, this human determination to beat evolutionary odds also reveals the desire to transcend the very quest for perfection that gave it birth.4

The relation between individual, object, and space relates to the boundary or interface.  Though the cyborg features as a key character in Ghost in the Shell, there are several other ways in which the interface may appear.  There is the second skin or the wearable; usually an object worn on the body that doubles in function as clothing, glasses, jewelry, etc.  Then there is the embedded addition to the body, for example Stelarc, or RFIDs inserted into the hand communicating with the nervous system.  There is autonomous space, such as flight simulators which act as a bubble of reality but the user is released once he steps outside the boundaries.  Lastly there is recombinant space, drawing from Ben Bratton’s Recombinant Architecture5 – no longer distinct entities, man and system become one and the same – a symbiotic embodiment where a transformation in the individual will result in a mutation of the space, and visa-versa.  The implications of this mode of inhabitation call into question the role of the human and the individual, evoking an ethical dilemma of consciousness belonging to a non-organic being.  This is a major theme in Ridley Scott’s Blade Runner, with the Nexus-6 androids.  In terms of the organic/non-organic, Ghost in the Shell also shares false-animals, drawing from Philip K. Dick’s Do Androids Dream of Electric Sheep.

Through the vehicles of the “spime” and the “biot,” Bruce Sterling suggests that we are entering a synchronic society, interacting not with objects but with instantiations, moving along a trajectory from nonexistence to postexistence in a continual feedback loop.6  Here Sterling emphasizes that our society is becoming one of a more temporalistic sensibility as opposed to a material one, but it is imperative to note that matter and material are still of key importance in a temporal fashion.  Nanotechnology allows us to explore the possibilities of embedding an intelligence in matter itself, creating smart materials that are in instances self-monitoring or healing, fused with sensors and actuators.  For instance, we can envision a future where materials change phase depending on necessity.  To some extent this is already happening, for example with Diller+Scofidio’s Blur Building of 2002, essentially an inhabitable cloud, becoming an instantiated atmospheric condition.

Related to this is the relation between biomimetics and building material posed by Manuel DeLanda.7  Can building material perform in the same way as does bone and cartilage – transforming one into another when the conditions arise for its necessity?  Or does it take on a musculature in that it may pull and contract in size, effectively exerting and bearing its own load?  Several advancements have already been made with programmable matter and metamaterials, from polymers and viscoelastic compounds to claytronics and self-reconfiguring robotics.  In the context of intelligent materiality, we have the potential for a scenario of active erosion, of conscious disassembly and reassembly.  This is a type of technology that, as Sterling describes, “can keep track of all its moving parts and, when its time inevitably comes, it would have the grace and power to turn itself in at the gates of the junkyard and suffer itself to be mindfully pulled apart.”8  This includes but is not limited to materials and processes that are biodegradeable, an auto-recycling technology.  This is expressed at the scale of the individual in the film, with the dolls that self-destruct after completion of a certain task.

As architects, we can never guarantee an outcome nor should we try to be apocalyptic.  What we can do is propose and suggest certain future scenarios – all of which have the possibility of being actualized.  Optimism must be coupled with a dose of caution, for dystopic predictions such as those in Ghost in the Shell have all the capacity to come true.  Such concern is politically oriented, for example with the Drone War – military leaders with the capability to fight entire wars from the relative security of their own fortified chambers.  This is why science fiction is so powerful a device, which is what Katherine Hayles explains when she writes that it “remains essential to nanotechnology precisely because it is not yet clear when and how the technology will become actualized.  For the same reasons, nanotechnology continues to attract science fiction writers, who find in its nascent possibilities the potential for good storytelling, marvelous inventions that transform the world, and scary scenarios that fascinate even as they repel.”9  Though some camps in the profession may argue that it is unrealistic to situate architecture as a discipline in the distant future, I would argue that for the above reasons this is precisely why we must continue to project beyond what is known into what could be, predicated on the evolution of inhabitability.