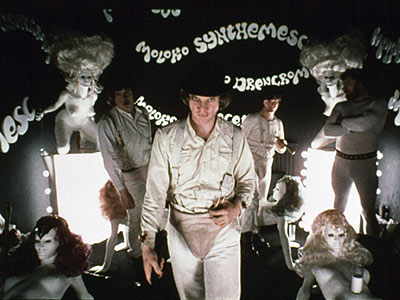 A Clockwork Orange and our Synchronic Society

A Clockwork Orange and our Synchronic Society

Stanley Kubrick’s A Clockwork Orange (1971) extends beyond a piece of entertainment and provides social commentary reliant upon visual motif, literally forcing the audience to consider the themes of power and control, consciously or subconsciously.  As the title of the film suggests and is symbolized throughout, the machinic qualities of a clockwork universe are juxtaposed by the natural: humanity oppressed by post-industrial mechanization.  But the film transcends this simple description.

Along with broader symbolism of the eye in general, the eye on Alex’s sleeve is subject to extensive metaphorical debate.  Here Kubrick is drawing a parallel, if not consciously referencing Georges Bataille’s Story of the Eye.  Published in 1928 during the advent of modernity, Bataille weaves together a bizarre narrative of thematic violence and sexual deviation, the goal of which is not wholly dissimilar from A Clockwork Orange.  In the Story of the Eye, Bataille articulates the heterogeneous qualities repudiated by civil society in their ability to shock and appall with an attempt to stir the audience from their apparent complacency.  His work is a desire to elucidate the humanness of being human, as well as the revolutionary individual’s unconscious pathological desire to be struck down violently, with which Bernard Tschumi later identifies in Architecture and Disjunction.

Tschumi draws heavily from Bataille, claiming that there is an “unremittent eroticism in architecture,” and that “architecture’s violence is fundamental and unavoidable, for architecture is linked to events in the same way that the guard is linked to the prisoner, the police to the criminal, the doctor to the patient, order to chaos.”1  Tschumi does not refer to violence in the classical sense, but rather in terms of bodies violating the purity of space and the reciprocal condition of space violating bodies.  In this respect, humans are just as much part of the architecture as the material composition of the floors and walls.  Kubrick picks up on this theme in a literal way, most noticeably in the Korova milk bar, where several nude fibreglass female figures compose the surreal scene in sexually subservient positions.  These figures make reference to the caryatid columns of female figures supporting the entablature of the Erechtheion at the Acropolis.  However, the blatant absurdity suggests that in contemporary society morality and intellect are devalued in favor of hedonistic pleasure, even weaving itself within our architecture and décor.  The celebration of sexual impulses in the film refers to a wider social phenomena crossing age and class boundaries, and also indicates a dehumanization and desensitization of the times.

Another parallel that suggests Kubrick was well aware of Bataille’s story is the recurring action of the character’s eyes pointing upward, usually in ecstasy or escapism into the character’s own world.  This occurs several times, including the poster of Beethoven in Alex’s room, then during Alex’s self-stimulation while listening to the Ninth, as well as the writer during the scene of Alex’s suicide attempt, and lastly during the final scene of Alex in the hospital.  This upward gaze is a theme that struck Bataille powerfully and is portrayed in the Story of the Eye, when he makes reference to his paralytic father by explaining, “Since he could not see anything, his pupils very frequently pointed up into space, shifting under the lids, and this happened particularly when he pissed […] with a completely stupefying expression of abandon and aberration in a world that he alone could see.”2  The eye looking upward also symbolizes the apex of power, taking visual cues from the pyramid on the dollar bill.  Kubrick is well aware of the potential for injustice and social destruction driven by lust for power, representing it in many ways including the visual motif of the pyramid in several scenes (the writer at his typewriter, the bodybuilder at the head of the wooden stairs, the spatial composition of the room at the Casino with the rival gang, and also in the attic).  Power is also represented in the form of male domination, with countless references to phallic objects throughout the film.

These parallels are not to go unnoticed, as Bataille’s work has had a deep influence on later generations, and remains relevant in post-war society and contemporary debates.  Both post-structuralist philosopher Michel Foucault and twentieth-century philosopher Gilles Deleuze were profoundly influenced by Bataille.  As the main theme of the film is control, the prison sequence was necessary to communicate certain values.  To Foucault, the prison is a heterotopic condition of disciplinary societies, and to Deleuze it is an environment key to the society of control.  The difference, Deleuze claims, is that “in the disciplinary societies one was always starting again (from school to the barracks, from the barracks to the factory), while in the societies of control one is never finished with anything – the corporation, the educational system […] like a universal system of deformation.”3  In A Clockwork Orange, Alex’s journey is one inherent to a society of control.  He is taken in by the system, physically enclosed within prison walls where he is ironically still quite free – maintaining the freedom of choice.  The real control mechanism, however, is exercised once he leaves the physical enclosure of the prison, after release from the Ludovico clinic, now modified by the government and expected to play his part as a reformed ‘free’ man.  Though it is debatable whether or not Alex was ‘cured’ by the Ludovico technique or if he was merely pretending, it is clear from the film that no longer do control and discipline need to be exercised within physical enclosure.  Immediately the classical boundaries are broken and architecture is forced to take on a new role.  Instead, control becomes more ubiquitous, exercised with pharmaceuticals and psychological alterations.  The issue of free will is defended by the priest in the film, emphasizing “when a man cannot choose, he ceases to be a man.”4

The ‘gaze’ that is so important to Bataille, Bentham, and Foucault is extended to a wider mode of surveillance in A Clockwork Orange.  While this is so, Bentham’s Panopticon is not obsolete, but instead takes on a broader contextual implication.  Deleuze makes reference to Guattari’s envisioned city moderated by electronic card and computers which track individual’s positions – a society which we can easily say is upon us today, with RFIDs, credit cards, and cell phones.  The film does not portray Alex as an individual or an object, but rather a process.  In prison, his identity is reduced to a number, and following his Ludovico treatment he is simply a tool for the government.  What both Deleuze and Kubrick suggest is that we are transforming into a synchronic society, with a temporalistic sensibility rather than a material one (though materials are still important in a temporal fashion).  We interact not with objects but instantiations, no longer static but moving along a trajectory from nonexistence to post-existence, on a process of self-actualization.  In such a society of processes and questionable boundaries, the role of edge, enclosure, spatiality, and materiality must be reconsidered and evaluated in the light of the direction in which we are headed in the future.