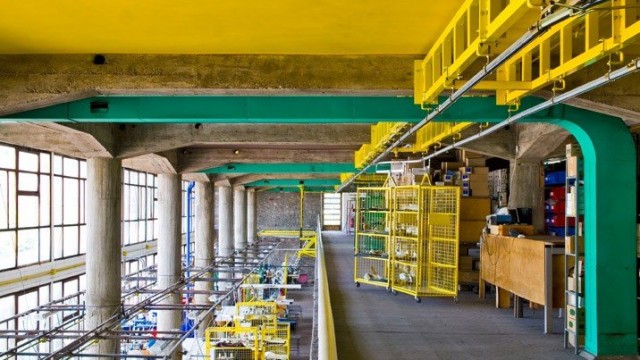 It began with a nearly imperceptible faint low rumble. After a few consistent measures, the rumble was accompanied by a buzzing vibrato whine. Staccato spits and snaps soon brightened the dirge, joined by a high tonal whistle. Suddenly – with a sharp metallic squeal – the pitch changed and the tempo increased. Plunk-drip-plunk; tick-tick-tick. Hums and whirs alternated in an insidious duet, while the fluctuating roar provided a scherzando rhythm. Like a cadenza in a concerto, the hiss-squeak sailed above the others, carrying the tune to its grand crescendo before dramatically dropping off until all that remained was the faint low rumble.

This performance is courtesy the symphony in the walls, and features instruments suspended in the ceiling and packed into the floor. Some may be visible, disguised by a layer of paint, while others may be entirely exposed. Instead of woodwinds, strings, and percussion, these are building systems: mechanical, electrical, plumbing, fire-protection, heating, ventilation, air-conditioning. While architects often attempt to visually suppress the ductwork, piping, vents, grilles, and cables, these systems nevertheless have an inherently multisensory presence within a space. Sound is one of the most prominent indicators of the existence and function of systems inside a building. The rotation of motors and fans and impellers combined with the force of pressurized air, and variably flowing liquids and gases produces a mechanical orchestra of varying frequency, duration, tone, volume, and pitch.

In 2010, ASHRE funded a study of HVAC noise as it affected the task performance of office workers.1 Indoor noise criteria were assigned subjective descriptions ranging from low-level to high-levels of “rumbly”, “roaring”, “hissy”, and “tonal” qualities. One conclusion from the study was that depending on exposure time, noise conditions with low-frequency rumble can result in the degradation of certain types of task performance while actually enhancing other types of performance. Independent of the findings themselves, such a study on human perception and performance indicates the importance of the effects of systems on physical inhabitation within buildings and occupiable spaces, be it for living, working, educational or recreational purposes. This extends well beyond visual impact, and should challenge those who maintain that systems are secondary or separate from design, that MEP/HVAC are simply acronyms beyond the domain of the architect.

Much can be determined from the sounds a building makes. By listening to the building’s internal symphony, one may be able to get a sense of the age, quality, and even the program of the space. On that note, the sound of silence is expensive, but less so than decades past. In fact, one may be able to tell more about the times from the mechanical system in a building than the shell or structure.

In his 1898 essay “Plumbers,” Adolf Loos argued that the metric of progress in culture was to be found in a building’s plumbing.2 In a witty and wry manner, Loos attempted to connect a nation’s water usage and the sophistication of fixtures to that nation’s level of economic and cultural development. He writes, “only that nation that approaches the English in water usage can keep pace with them economically; only that nation that exceeds the English in water usage is chosen to overtake them in world dominance.”3 Loos particularly faulted his home city for its lack of progress compared to America, England, or Germany, begging the “Viennese plumbers do their job as fully and completely as possible in leading us to this great goal – the achievement of a level of culture equal to that of other Western countries.”4

Today, relative progress can still be determined by the efficiency and quality of not only plumbing but all building systems. With the advent of the computer and the rise of telecommunications, there are additional whirrings of fans and blinkings of LEDs – machines and systems that increase heat-production which in turn raise cooling demand. A global scale must be considered in the case of Internet support infrastructure, not only in buildings but with fiber-optic cables submerged in the ocean. These systems signify cultural and economic status as well as connectivity and accessibility, but above all they are deeply entrenched with political connotations.

Loos’s argument was not a ludicrous one. The rate at which building equipment and technology improves is disproportional to the rate at which buildings age. Structure and shell are conventionally built to last twice as long or longer as the internal life-support systems. Entire HVAC systems may be replaced multiple times in a building’s lifespan. As such, it necessarily follows that one would be able to glean more about the times from the building’s systems than from its structure or shell. This illustrates the inherent slowness of architecture.

Perhaps because of this comparative slowness, there remains a schism between systems and space. Coordination sets comprised of architectural, mechanical, electrical, and plumbing drawings are typically some of the most complex and difficult documents to comprehend. When the coordination process is left until the end of the design, systems often clash and oppose architectural intent, but it need not be that way. Of course the actual installation of systems also need not infringe on contractors’ means and methods. When Leonardo da Vinci began to use dissection as a means to make more transparent the inner workings of anatomy and physiology, he turned something scary and unknown into something accepted and even appreciated for its artistic merit. In the same vein, architects have every capability to use systems to their advantage in design, not only as a passive element but to benefit the user.

Building enclosure is analogous to skin; structure to skeleton; which means that mechanical systems are analogous to the lungs and internal organs which filter and transport liquids and gases. Even Le Corbusier considered these as systems to support the life of the building.  At the Claude et Duval Factory (1951) in Saint-Die-des-Vosges, France, Le Corbusier capitalized on the program of the textile factory as a place of mass-production to emphasize the essential importance of what allows the building to breathe and function: the mechanical systems. In Corbusier’s design the systems work within the free plan to function as a semi-autonomous neutral field. Each system is graphically exposed as part of the design and coded with primary colors according to function.5 Extruded steel profiles of green denote air handling, yellow signify electrical and lighting, blue for water services and plumbing (figs. 1-3). Though color is used elsewhere in the ceilings, woodwork, and shades, the most striking use of color organically weaves its way through the interior by way of the mechanical systems. Le Corbusier considered these life-support systems as simultaneously autonomous in function yet distributed and integrated with the building as a whole. 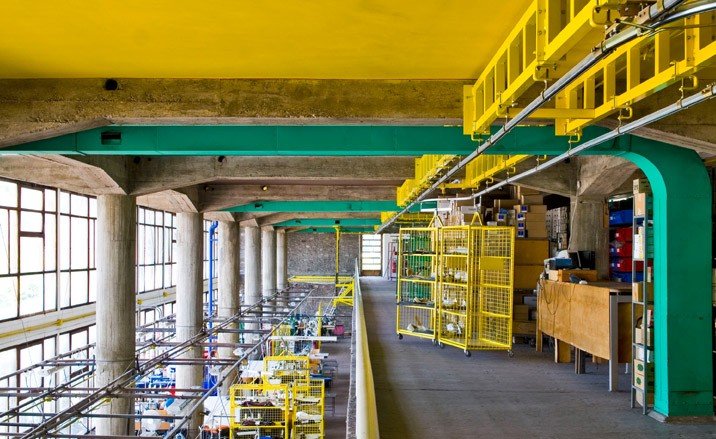 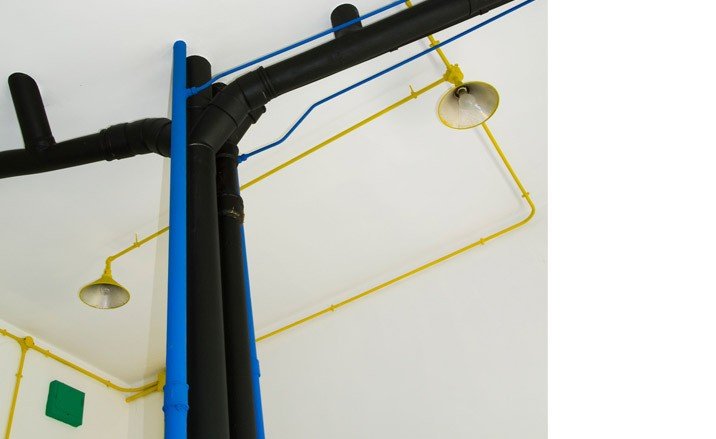 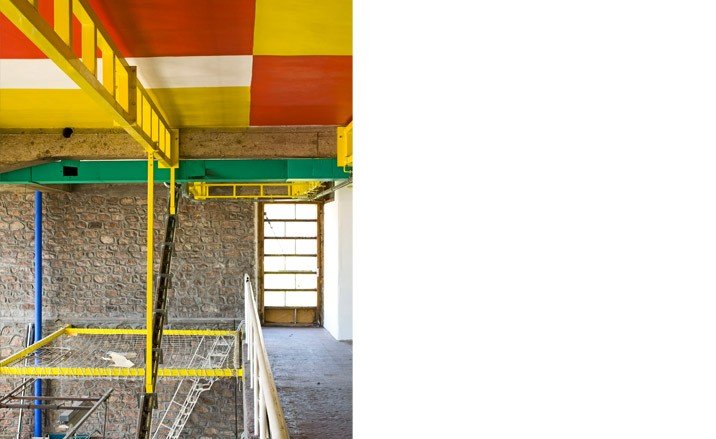 Curiously, the factory at Saint-Die can be considered an inverted, interiorized precursor to the Pompidou Centre, also in France, designed a quarter of a century later by Rodgers and Piano. To return to the analogy of the body, the Pompidou Center can be seen as a herniated externalization, or an exoskeleton of systems, circulation, and services which support the pristine internal space. Despite their prominent visual expression from the exterior, the systems remain autonomous elements, clear and distinct from the interior condition in an intentional design decision (fig. 4). 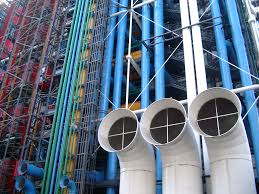 In contrast, the project that has notoriously served as inspiration for Rodgers and Piano takes a significantly more integrated approach to systems. The similarities between the Pompidou Center and the Fun Palace (1960s) by Cedric Price have been well documented, particularly the monumentalization of technology. As opposed to Pompidou, however, the schemes for the Fun Palace show mechanical systems, services, and circulation as not oppositional but entirely diffused throughout, treated as elements equal in importance and function to the program and structure. At least one diagram for the Fun Palace resembles a circuit diagram in the electrical trade (fig. 5) which is often attributed to the influence of Gordon Pask, cybernetics and systems-design theory. 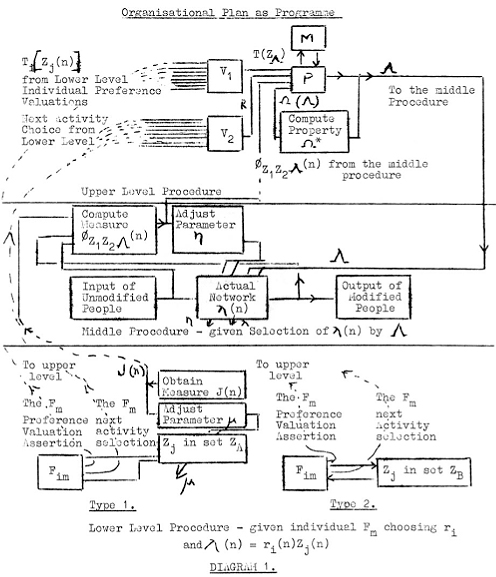 Price takes the position that systems need not be subordinated by architecture; systems are architecture. Structural trusses are supported by service towers linked to gantry cranes capable of rearranging the parts. Mechanical systems define space, with static vapor zones and movable screens for air handling, and a sewage purification plinth. For Price, architecture was never singularly visual, but always multi-sensory. As such, the inherent theatricality and orchestration of mechanical systems was maximized in his designs. Though the Fun Palace remains unbuilt, it is not inconceivable that Price would utilize the rumbling, hissing, and buzzing  noise of the vents, ducts, pipes right along with his audio-phonic curtains as theatrical performance elements to correspond with Joan Littlewood’s desire to depart from the stagnant “quaint old theaters”6 of Britain.

Price’s approach to eradicating permanence through dynamic performance and theatricality displays his frustration with the slowness of architecture in comparison to building technologies. The project is an early proponent of Moore’s law – which mechanical systems and building technologies tend to follow. Along these lines, Price does not consider the building as a classical body of layers but more of a deconstructed, dissected interworking of systems, none of which are more important than the other. Without one system, the rest would not be able to function. Price is one of the first designers to begin considering a shorter life-cycle to buildings. The Fun Palace was meant to be “a short term life toy of dimensions and organization not limited by or to a particular site.”7 Though it is never explicitly stated, Price’s designs live and die with their users, and become continually reborn. This contributes to a greater symbiosis with systems and inhabitants, between function and experience, and mirrors very closely the cellular life cycle of the human body.

In 1971 Louis Kahn famously suggested his students talk to their building materials, namely the brick, to see how it wants to be treated in design. While this is a nice thought, architects often forget that mechanical systems are material as well. Unlike brick and concrete lintels these systems may actually talk back – with their orchestra of pressurized gases and flowing liquids. Perhaps now it is time for mechanical systems to take the stage.